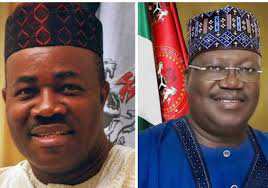 Senate President Ahmad Lawan and former Minister of Niger Delta Affairs, Senator Godswill Akpabio have made the senatorial list of the ruling All Progressives Congress (APC) for the 2023 general poll.

Lawan and Akpabio had contested the presidential ticket of the APC but lost to the national leader of the party, Bola Ahmed Tinubu.

Following Lawan’s defeat at the presidential primary, he started battling to reclaim his senatorial ticket for Yobe North.

Lawan has been representing the senatorial district since 2007 when he crossed over from the House of Representatives to the Red Chamber.

But the senatorial candidate of the party from Lawan’s zone (Yobe North), Bashir Sheriff Machina, however, refused to step down for him, saying he bought the party’s expression of interest and nomination forms and was duly elected at the party’s primary monitored by the Independent National Electoral Commission (INEC).

However, Lawan has finally made the list of senatorial candidates to contest the 2023 poll on the APC’s platform according to a document sighted by our correspondent last night.

It’s not clear how this happened.

Similarly, the name of a former governor of Akwa Ibom State who resigned as Minister of Niger Delta Affairs to contest the party’s presidential ticket, Senator Akpabio appeared on the list of APC senatorial candidates for the 2023 poll.

Akpabio was reported to have lost his Akwa Ibom North-West senatorial bid on grounds that the senatorial primary which produced him was not monitored by INEC.

But in the document sighted by our correspondent last night, Akpabio will be slugging it out with candidates of other political parties.

Efforts to get the reaction of Machina proved abortive as he did not respond to text messages sent to him last night.