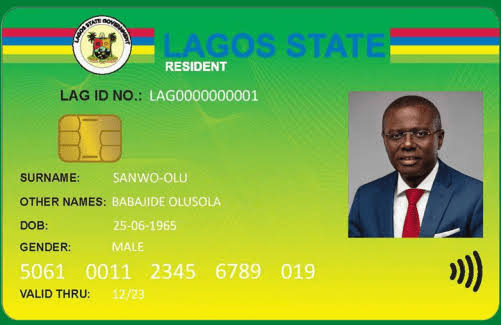 The Lagos State Government has announced that it is set to inaugurate an upgraded residents’ identity smart card for citizens of the state.

The General Manager of Lagos States Residents Registration Agency, Mrs Ibilola Kasunmu, made this announcement on Tuesday, adding that the new card will be inaugurated in all five divisions of the state.

Kasunmu also noted that the smartcard can be used by owners as a payment card for services across multiple vendors, including buses, ferries, and supermarkets in the state

She said, “The new LAG ID card will be launched on Wednesday, July 20 by the Lagos State Governor, Mr Babajide Sanwo-Olu at the Police College, Ikeja GRA and it will be launched simultaneously, across the five divisions of the State: Ikeja, Badagry, Ikorodu, Lagos Island and Epe. One of the key highlights of the day would include a live demonstration of the smart card, its benefits as well as the unveiling by Mr Governor.

“The new card is embedded with more features and functionalities to offer the card holders wider and faster access to services provided by the Lagos state government.”

Kasumu also urged residents who registered before 2018 to update their records before they will be given the new LAG ID card.