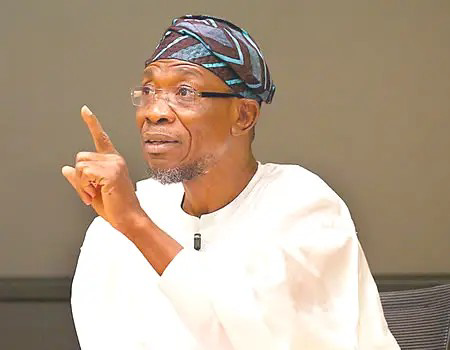 The minister who arrived the custodial centre at about 5:35pm, first met with personnel of the Nigerian Army deployed in the facility.

Inspecting the perimeter fence through which the terrorists penetrated the outer cordon of the centre, Aregbesola queried; ” How many soldiers do you have here? Thirty one? One Armoured Personnel Carrier. Then the armed squad on top of the towers. Anybody inside those towers would see far enough and beyond the fence?

“I am disappointed by the level of defence by the team that was about here to protect the facility. We had enough officers and men to protect this facility but unfortunately, they could not hold their grounds effectively and that was the reason for the breach. Otherwise, the facility itself is a world class custodial centre.

“My position is clear. Since April 2022, I declared that all our custodial facilities are red zones and that whoever attempts an attack must be not live to tell the story. I still maintain this.

“Kuje is the most fortified in the country if fortification for security is the determinant of whether is medium or maximum, it is medium by size but maximum by the security being put there. We have a platoon of soldiers deployed here. We have the high grade of military and police and other security forces deployment for protection but strangely something happened most of which I cannot say on camera.

“I want to believe those who escaped can only run but cannot hide .

“It is very regrettable that this happened let put it in context, the nation was experiencing asymmetric warfare. Yes , the insurgents have been degraded in the North East of Nigeria, 61, 000 of them are in our custody in the North East, the effect of the effectiveness itself in degrading them in the North East is what we are experiencing. As sad as it  is, we must put behind whatever it is happening in the contest of the asy warfare unleashed on the nation by this criminal elements and we will rise to it, that’s the assurance I want to give to Nigerians , as I said if deployments is the basis of security, Kuje was as at Tuesday heavily fortified”, he added.