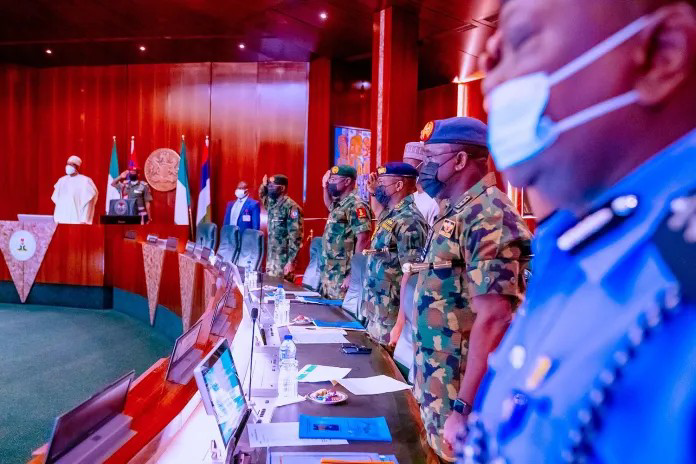 The National Security Council, on Friday, said it was “considering the appropriate action to be taken” on the recent release of the leader of the Indigenous People of Biafra, Nnamdi Kanu.

It also backed the Attorney-General of the Federation and Minister of Justice, Abubakar Malami, SAN, who clarified that Kanu’s release was not equivalent to an acquittal.

The Minister of Police Affairs, Mohammed Dingyadi, disclosed this to State House correspondents shortly after the NSC meeting chaired by the President, Major General Muhammadu Buhari (retd), at the Aso Rock Villa.

Dingyadi, who spoke alongside his counterpart in the Ministry of Interior, Rauf Aregbesola, said Kanu was only discharged.

He added that  the Federal Government would explore other legal instruments to pursue the matter.

However, he noted that the council did not discuss a possible political route that Malami had raised last November.

The council, he said, only discussed the Appeal Court judgment, noting that solutions to such matters could be considered so far as they were not subjudice.

The Court of Appeal in Abuja on Thursday upheld the appeal of the detained leader of the proscribed group and ordered his release.

But a statement signed by the AGF’s spokesperson, Dr. Umar Gwandu, asserted that “Kanu was only discharged and not acquitted.”

“Consequently, the appropriate legal options before the authorities will be exploited and communicated accordingly to the public,” the statement added.

“The issue of Kanu has also been raised and Council was briefed on the state of things on the matter and it was observed that Kanu was discharged, but he was not acquitted.

Meanwhile, Ifeanyi Ejiofor, lawyer to the IPOB leader, Kanu, has asked the AGF to comply with the order of the Abuja Division of the Court of Appeal.

He also advised Malami to consider voluntary resignation for allegedly exposing the Federal Government to international embarrassment and ridicule.

He was responding to the statement by the Special Assistant (Media and Public Relations), to the AGF, Dr. Umar Gwandu, in reaction to the Appeal Court judgment which quashed the charges of terrorism preferred against him.

According to him, the reference by the AGF to the charge pending against Kanu before he left Nigeria in 2017 and the indication that the Federal Government may continue with the charge “really showed his total disconnect with the law, with greatest respect to his office.’’

Malami had said that the Federal Government was considering various legal options, including proceeding with the counts that were pending against Kanu before the invasion of his house by soldiers on September 14 2017.

But Ejiofor said the AGF “should be appropriately guided in law.”

He said, “I implore him to meticulously read the full judgment of the Court of Appeal, immediately comply with orders made therein and possibly consider the most appropriate option of voluntarily resigning, for exposing the Federal Government to this international embarrassment and ridicule.

“Now, for the avoidance of doubt, the Federal Government has no options. It has only one option, namely, to appeal against the judgment of the Court of Appeal to the Supreme Court. And the exercise of this latter option shall not constitute a bar to immediate compliance with the order of the Court of Appeal which directed the immediate and unconditional release of Onyendu Mazi Nnamdi Kanu.

“The order made by the learned Justices of the Court of Appeal is sacrosanct and must be obeyed immediately without further ado.’’

Arguing that no further charges can be sustained against his client, the defence lawyer stated, “On appeal, the Court of Appeal struck out the whole charge and held that the lower court had no jurisdiction to try Onyendu Mazi Nnamdi Kanu.

‘’That being so, that charge that has been pending against MNK since 2015 and contains counts of alleged offences committed by him before he escaped being killed in Nigeria in 2017, no longer exists. It has been struck out.’’

Ejiofor in a live Facebook broadcast also flayed the Department of State Services for not releasing his client 24 hours after the court orders, describing their action as illegal

PREVIOUS POST I rejected Atiku’s suggestion to take N1bn loan for PDP – Ayu
NEXT POST Subsidy: I’m sorry for the next President – Sanusi