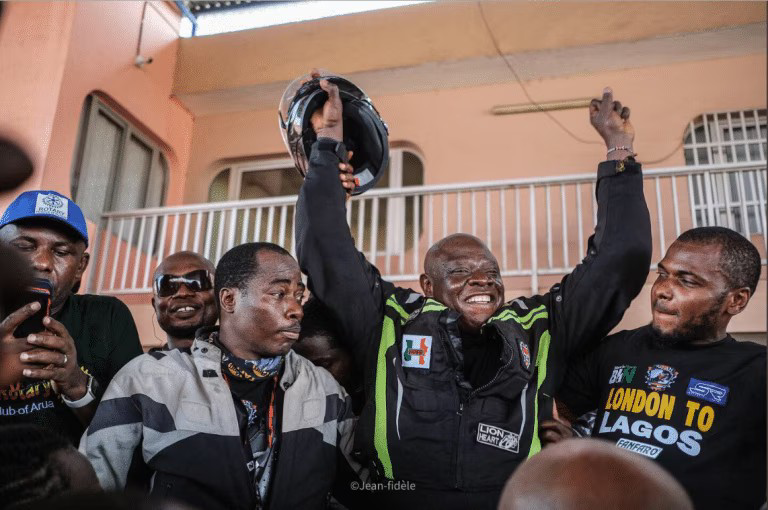 Nigerians have trooped out in mass to welcome the London to Lagos biker, Kunle Adeyanju as he finally arrives in Nigeria.

The resilient man who embarked on the journey 39 days ago became a viral Internet sensation as people monitored his movement from country to country.

Adeyanju had declared that his journey was on purpose and it is to create awareness and raise donations for the kick out the Polio mission.

The citizen set a record of crossing at least 14 countries to arrive in Nigeria. Adeyanju has been updating his followers and the world at large via his microblogging platform account about his stopover and challenges faced in different countries.

Adeyanju’s long journey based on reports covered at least 12,000km. The courageous man had passed through France, Spain, Morocco, Senegal, Mali, Ghana, Cotonous, Cote d’Ivoire and then to Nigeria, his stop point.

Revealing the purpose of his journey, Adeyanju said he intends to raise funds for charity, assuring that the money received from donations will be dedicated to primary healthcare, polio plus project, water and sanitation

Adeyanju also dropped updates as regards his journey on his Twitter handle where he received both words of encouragement and discouragement from the bird app users.

However, today Sunday, 29th May 2022, he touched down in Lagos State amid cheers from the crowd who welcomed him.

Nigerians have complimented this rare act of bravery and determination.

Nigerian man, Kunle Adeyanju, biking from London to Lagos has finally arrived in Nigeria.
He arrived on Sunday to cheers from the crowd who had gathered in anticipation of his arrival.