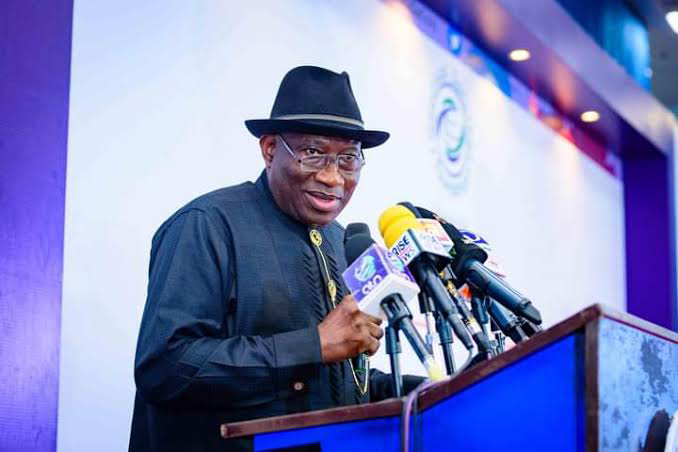 Former President Goodluck Jonathan has called for better collaboration among democratic actors, serving and past leaders in West Africa to address issues affecting the peaceful transfer of power in the region,

The Chairman of the Goodluck Jonathan Foundation (GJF) made the call on Wednesday at a strategy meeting of the West African Elders Forum (WAEF) in Abidjan, Côte d’Ivoire.

Jonathan observed that the friction between incumbent presidents and their predecessors was not in the best interest of democracy.

“One grey area we have to look into is the observed antagonism between past leaders and serving leaders in some countries of the sub-region. This does not encourage the healthy practice of democracy.

“Also, in some of our countries, the democratic space appears to be shrinking. There is the need to figure out how to navigate through such challenge to grow democracy in West Africa and the rest of Africa.”

Jonathan said that the focus of the forum was preventive diplomacy and that the purpose of the strategy meeting was to see how best to engage with stakeholders in West Africa ahead of the forthcoming elections in some countries.

“As a forum, we believe so much in preventive diplomacy. `One of our objectives is to ensure that we shore up the democratic gains of our region by meaningfully engaging different stakeholders, in a pragmatic and responsible manner.

“Meetings like this, serve as an opportunity to review the gains, challenges, and threats to peace and democracy in our sub-region and help us strategize on how to meditate so that threats do not degenerate into conflicts.’’

Jonathan said, “as democrats, we believe elections are the cornerstone of democracy, and the activities surrounding the process could either make or mar the developmental aspirations of a nation.

“From recent events in Africa, we can draw a lesson on the relationship between peaceful elections, democratic sustenance, and national stability. This is why every process leading to the election is very important to the outcome of the poll

“ In our sub-region, Nigeria, Sierra Leone, and Liberia have scheduled general elections next year, and, as we know, elections could serve as a major trigger for violence and instability in our continent.

“This is why it is important we closely monitor the electioneering processes in these countries and watch out for signs that may precipitate crisis.

“As elders, it is our responsibility to identify threats to the transition programs in our sub-region and seek ways of proactively engaging relevant stakeholders toward resolving such challenges.”

Jonathan also called on those in government to redouble their efforts and commitment to democracy by ensuring that democracy translates to better welfare for the people.

Also speaking, the Executive Director of GJF, Mrs Ann Iyonu said it was imperative to raise awareness and develop a collective sense of urgency in addressing some of the current trends threatening the peace, stability, and democratic governance of West Africa.

“One of the principal objectives of the WAEF is to accompany West African countries in their various efforts at consolidating their democracies.

“In that regard, it has become very imperative to raise awareness and develop a collective sense of urgency in addressing some of the current trends threatening the peace, stability, and democratic governance of West Africa as the region races towards holding crucial elections in 2023, notably in Nigeria, Sierra Leone, and Liberia,’ Iyonu said.

Others include Fatoumata Tambajang: former Head of the United Nations Office for West Africa and the Sahel (UNOWAS, Mr. Ibn Chambas and members of the diplomatic corps.

The West African Elders’ Forum is an initiative of the Goodluck Jonathan Foundation with support from the Open Society Foundation.