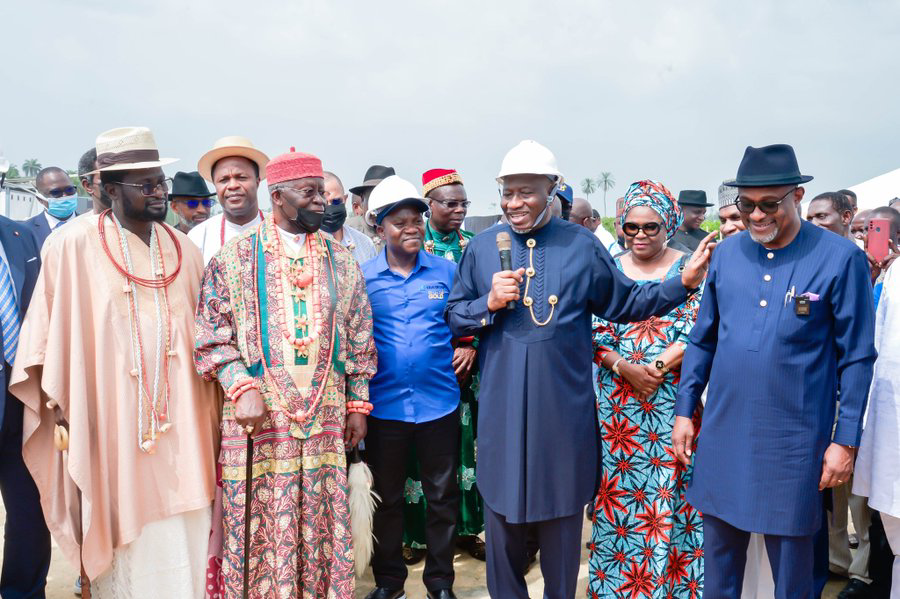 Former President Goodluck Ebele Jonathan and the former Minister of State for Energy and current chairman of Nigeria LNG Board, King Edmund Daukoru have applauded the Nigerian Content Development and Monitoring Board (NCDMB) for the effective implementation of the Nigerian Oil and Gas Industry Content Development (NOGICD) Act and the huge impact it had made on the economy.

They spoke on Thursday in Yenagoa, Bayelsa State during the groundbreaking ceremony of a 64,000 litres per day lubricants blending plant being developed at Gbarain, Bayelsa State by ERASKON Nigerian Limited in partnership with the NCDMB.

Former President Jonathan had signed the NOGICD Bill into law in April 2010 when he was in office and he extolled NCDMB under the leadership of Engr. Simbi Kesiye Wabote for the outstanding successes it had accomplished, notably for catalysing the industrialization of Bayelsa State through the deliberate domiciliation of strategic oil and gas projects and capacities. Some of these include the 12,000 barrels per day (bpd) Azikel modular refinery and the 2,000bpd Atlantic modular refinery, Rungas composite LPG cylinder manufacturing facility at Polaku, the oil and gas industrial park at Emeyal-1 and the Board’s 17-story headquarters building.

Others are the partnership with a core investor and the Nigerian National Petroleum Company (NNPC) Ltd for the development of 10,000metric tonnes per day methanol production plant in Brass, the development of the Brass Island Shipyard to domicile the repair and maintenance of vessels and LNG carriers and the partnership with NNPC and a core investor for the development of a coastal petroleum products terminal in Brass, Bayelsa State as well as the construction of the Oloibiri Oil and Gas Museum and Research Centre in Ogbia LGA of the state in collaboration with PTDF, Shell, and the Bayelsa State Government.

In his comments, King Daukoru, Amayanabo of Nembe Kingdom in Bayelsa State, who had previously served as the Secretary-General of the Organisation of the Petroleum Exporting Countries (OPEC) and Group Managing Director of NNPC, expressed delight that NCDMB’s interventions were transforming Bayelsa state into a haven for value addition in the oil and gas industry and changing its reputation of just being a base for commodity export, with no industrial base.

He hinted that the number of derivatives and linkages from the oil industry was limitless, and they create opportunities for employment and economic advancement in the polity. He charged stakeholders of the state and host communities to support investors and companies in their domain and refrain from burdening them with onerous demands, so they can thrive sustainably.

In his address, the Executive Secretary of NCDMB, Engr. Simbi Kesiye Wabote explained that the partnership with ERASKON was in line with the Board’s mandate of developing local manufacturing capacity, providing employment opportunities, and increasing local content in the Nigerian oil and gas industry and linkage sectors.

He hinted that Section 70(h) of the NOGICD Act of 2010 mandates the Board to assist local contractors and Nigerian companies to develop their capabilities and capacities to further the development of Nigerian Content in the oil and gas industry.

He remarked that Nigeria’s in-country manufacturing capacity for lubricating oil falls far below the consumption, hence the shortfall is met through importation, resulting in loss of revenue and job opportunities. The ERASKON facility will produce approximately 64,000 litres of lubricants per day and more than 20million liters of products a year, becoming one of the largest lube plants in the country, with the capacity to serve the Niger Delta region and beyond.

According to the Executive Secretary, no lubricant blending plant exists currently in Bayelsa State and ERASKON decided to domicile and domesticate the production and thereafter submitted proposals to the Board, which was approved after a diligent review of the technical and commercial viability.

He confirmed that the blending plant would be beneficial to the host community, state, and the neighboring states through meeting their needs for lubricant products as well as providing direct, indirect, and induced job opportunities.

In the second phase of development, the company would go into the manufacturing of industrial chemicals such as drilling and production chemicals as well as transformer and turbine oil, in addition to household products such as detergents and aerosols, he added.

On why the project was sited in Bayelsa State, Oko said the lubricants facility is making a huge impact in the lives of the communities, promoting development, creating employment and empowering Nigerians. It would also develop local manufacturing capacity and increase local content participation in the industry, he said.

He stated that the blending plant is co-located with the Shell Gas processing facility, Azikel Refinery, the 550MW National Integrated Power Plant (NIPP) and the transmission station as well as the NCDMB Gas Park. He hinted that “an industrial hub is quietly emerging along the River Nun corridor in the Niger Delta, and we are very excited to be part of the new, bold and innovative story being written. This project will be an important factor in changing the narrative about the Niger Delta.”