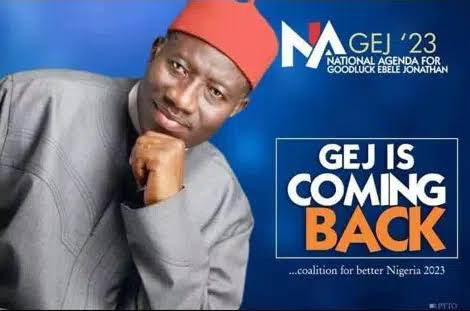 Posters with messages urging  former President Goodluck Jonathan to contest the next presidential elections have flooded the major streets of Abuja, fuelling speculation on the former president’s next political move.

The posters bore the simple message “Goodluck Jonathan: You Must Fun” and was splashed on major streets of Abuja, but was mostly concentrated on Blantye Street which houses the national secretariat of the ruling All Progressives Congress (APC).

Interestingly, the posters didn’t have the logo or name of any of the political parties. Under the Electoral Act there is no provision for independent candidacy.

Should Jonathan elect to run, he would, according to the law, pitch his tent with any of the several political parties.

Since leaving office in 2015, Jonathan has refrained from participating in political activities in both his home state, Bayelsa, and at the national level.  He, however, has been active on the international stage, representing international organizations like the African Union (AU) and Economic Community of West African States (ECOWAS) mediate in crisis-ravaged countries.

He, however conceded that his boss has been flooded with inquiries on whether or not he would contest the 2023 presidential election, and on what ticket.

“We are not in any way associated with any campaign posters. Should His Excellency former President Goodluck Jonathan choose to contest, he is eminently qualified to do so.

“After all, in 2015, nobody advised Goodluck Jonathan before he called to concede defeat and congratulate  President Muhammadu Buhari. In like manner, nobody should talk of influencing the former president to run or not to run.

“If he’s going to run or not, it’s a question of time and shall be his personal decision. It is within.the rights of people to pressure him to run. But it is also within his own right to run or not. The fact remains that he is very constitutionally qualified to run”, Eze declared.