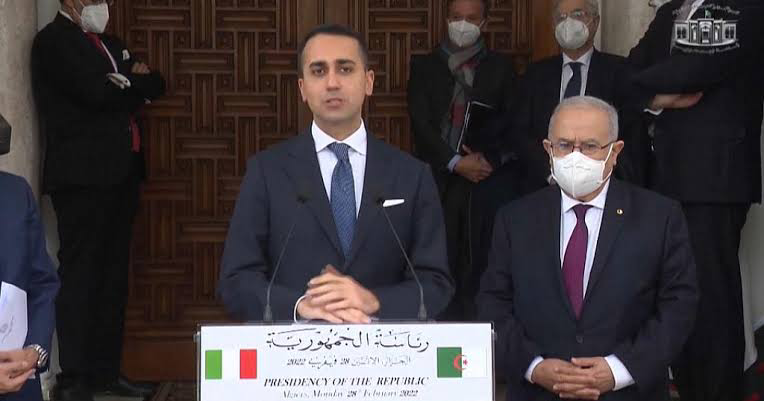 Algeria to discussed with Italian Foreign Minister Luigi Di Maio an increase in gas supplies to compensate for a possible decline from the Russian side.

On the menu of the talks were “the strengthening of bilateral cooperation, in particular to meet the needs of European energy security, in light of the conflict in Ukraine,” Di Maio had tweeted shortly after his arrival in Algiers.

Russia launched an invasion of Ukraine on Thursday, sending shockwaves internationally and triggering a battery of Western economic sanctions against Moscow.

“Our goal is to protect Italian companies and families from the effects of this atrocious war,” Di Maio told reporters in Algiers, but did not give figures on a possible increase in gas deliveries from Algeria.

“The Italian government is committed to increasing energy supplies, including gas, from various international partners,” including Algeria, “which has always been a reliable supplier,” he said.

Algeria is the second supplier of gas to Italy, behind Russia.

The Algerian state-owned hydrocarbon giant Sonatrach said Sunday that it was ready to provide more gas to Europe, including through the Trans med pipeline linking Algeria to Italy.

Sonatrach “has unused capacity on the Transmed pipeline”, which could be used to “increase supplies to the European market”, said its CEO, Toufik Hakkar.

Europe is the “natural market of choice” for Algeria, which currently contributes to 11% of its gas imports, he said.

Mr. Di Maio was accompanied by a delegation including Claudio Descalzi, CEO of the Italian hydrocarbon giant Eni, very present in Algeria where it is a partner of Sonatrach.

Italy intends to diversify “as soon as possible” its energy sources to reduce its dependence on Russian gas, said Friday the head of the Italian government Mario Draghi, regretting the bad choices of the past.

Italy, which imports about 95% of the gas it consumes, is one of the European countries most dependent on Russian gas.

About 45% of the gas imported by the peninsula comes from Russia, said Draghi, adding that the peninsula could increase its gas deliveries from Algeria, but also from Azerbaijan, Tunisia and Libya.