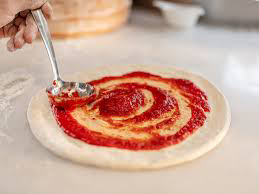 A materials scientist with a yeast allergy set out to make a yeast-free pizza dough that still rises like a classic Neapolitan pie.

Now, in a new paper published March 22 in the journal Physics of Fluids, he and his colleagues report that they’ve succeeded in their quest — although so far, the team has only baked disks of dough that measure about 0.4 inches (10 millimeters) in diameter and lack any sauce, cheese or other toppings.

These tiny, naked pizzas allegedly taste “exactly like the yeast pizza,” Ernesto Di Maio, a materials scientist at the University of Naples Federico II (UNINA) and senior author of the study, told NPR. “We tried it, and it was nice and crusty and soft,” he told Science.

But Francisco Migoya, head chef at Modernist Cuisine, told NPR that he’d need to taste the yeast-free dough for himself to see if that assessment is accurate. “Yeast does so many things to dough, besides fermentation, like the flavors that you find, the complexity of aromas,” Migoya said. Alessio Cappelli, a food technologist at the University of Florence, told Science that he also has doubts about the dough’s taste and about whether this unique new leavening method will ever be widely used.

A classic Neapolitan pizza dough contains flour; salt, for seasoning; water; yeast; and sugar, for the yeast to snack on. As the yeast gobbles up the sugar in the mix, the live microbes release carbon dioxide that gets trapped in the sticky dough, causing it to swell up with gas. When the pizza dough gets baked, the yeast dies off in the extreme heat of the oven but these bubbles of gas remain trapped in the crust, giving it a light, airy texture.

“The aim was to try to make the same texture that we love so much in pizza without a chemical agent,” Rossana Pasquino, study co-author and UNINA chemical engineer, told Science.

To achieve this, the team made pizza dough using the classic recipe, minus the yeast and sugar. They then placed a small sphere of the dough into a toaster oven-size autoclave, which is a kind of a pressurized oven often used for sterilization to kill bacteria, viruses and fungal spores, according to NPR.

The researchers then pumped gas into the autoclave, to fill the dough with bubbles, and raised the pressure as high as 10 atmospheres before carefully releasing that pressure, at exactly the right moment. “If you are too late — you reduce the pressure after the dough is solid — then it cracks,” Di Maio told Science. “If the pressure release is too early … it collapses.” Di Maio uses a similar technique in his lab to inject bubbles into polyurethane, a synthetic polymer, NPR reported.