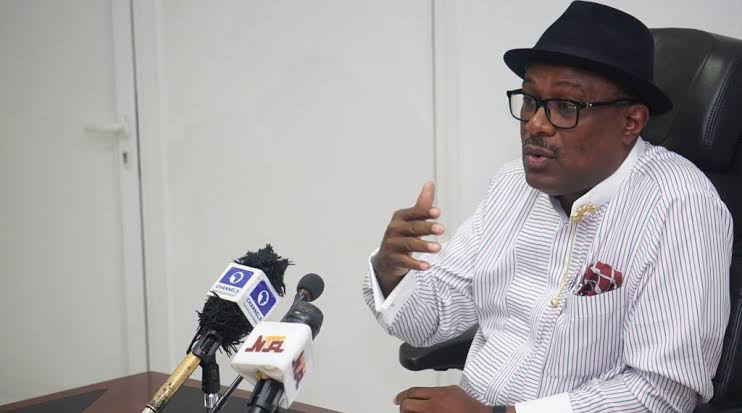 The Executive Secretary of the Nigerian Content Development and Monitoring Board (NCDMB), Mr. Simbi Wabote has taken a swipe at international oil companies (IOCs) operating in the country, urging them to stop the maltreatment of indigenous firms in the sector.

Speaking at the just-concluded Nigeria Oil and Gas (NOG) in Abuja, Wabote stated that as the IOCs complain about the inclement business environment, they must also take cognisance of their negative attitude towards local oil servicing companies.

Specifically, the NCDMB helmsman told the oil majors to promptly pay for contracts with the local entities and stop giving excuses even when they (IOCs) initiated the deals.

In some cases, Wabote lamented that the local firms were required to form consortiums, sign performance bonds after borrowing from the banks, noting that if the IOCs should come into equity, then they must come with clean hands.
Reacting to one of the remarks by one of the IOCs that Nigerian firms in the oil industry should form groups to present a stronger front, Wabote noted that beyond that, the oil majors must begin to treat local firms with dignity, explaining that forming consortiums was not a magic wand.

So creating a consortium is not a magic wand. It requires all the serious commitments to have a project of that magnitude. While there are challenges in doing business in Nigeria, I think we all have a share of the blame and we must accept that. When we are talking, we need to put that on the table,” he noted.

According to him, in the height of the Covid-19 pandemic, many costs by service providers were reviewed downwards. However, Wabote explained that since oil price hit new heights, there had been no plan to increase it for local companies.

“I give you an example, some of the companies, when oil price came down, the IOCs and the NNPC (Nigerian National Petroleum Corporation) demanded a 40 per cent reduction in costs.

“Some of them were providing them vessels for about $20,000 to $25,000 per day. We negotiated down to $12,000 or $15,000 per day and they did that because they wanted to remain in business. Oil price was $27 and at some point it was negative. Now, it’s $110, where is the marching order to renegotiate those contracts with those local operators?

On top of that they still squeeze them, but because there are no jobs and jobs are limited, you cannot park your facility in your garage, even if you do it somewhere, you still spend money to do so.
“Out of that, these companies still struggle and make little or nothing in terms of margins. They have to service loans. So the onus is also on the IOCs and service providers to say, this is what is possible.

If you leave it to me, I will fix a price to it because it has to move in tandem with the oil price. When it goes up, it should also go up with service providers vice versa. That’s the way to keep local businesses from going underground,” he argued.

On the issue of piling debts, the NCDMB boss stated that it was unfair for the IOCs to initiate contracts and not pay for upwards of six months, stressing that Nigeria Agip Oil Company (NAOC) remains a major culprit.
“The other one is about payments. We don’t pay these local contractors. They work six months and don’t get paid. I don’t think NAOC is here because they are the biggest culprits.

Meanwhile, they will demand for the service and the local companies will provide them the service, but when it is time to pay, the don’t. When I ask questions they say their joint venture partners have not paid their cash calls.
“So, why did they demand for the service? Why didn’t they wait until they get the cash calls payments? These companies are going under because they take loans, they do the business, but by the time you pay them, the capital and the profit are all gone,” Wabote lamented.

He noted that the situation had become so bad that he had been joined in several lawsuits by the affected companies even though the NCDMB had no hand in such bad deals.

“So these are things we need to also address. As we point fingers, we should also look inwards in terms of making sure that local businesses also survive because at times I can tell you I wasn’t joking when I said I get sued in court as a co-defendant because Agip is not paying and in some certain instances, they put my name to appear in court

“Sometimes they call me to intervene and I call the companies and say why are you not paying, they say, we are not being paid cash call. But you give out the service to these people who will take loans to provide the service.

“So it’s a two-way street. While we are talking about ease of doing business, those are the factors that make doing business a lot more difficult. If you’re paying me and I am dealing with the community and dealing with all those, I don’t care, so long as I am getting the money to solve the problems.

“But if you are not paying me and these problems are there, it is actually frustrating and I feel their pain,” he added

Wabote further posited that the entire industry needed to come together to address the outstanding issues “so that we can get local businesses to continue to do business rather than just wither away.”