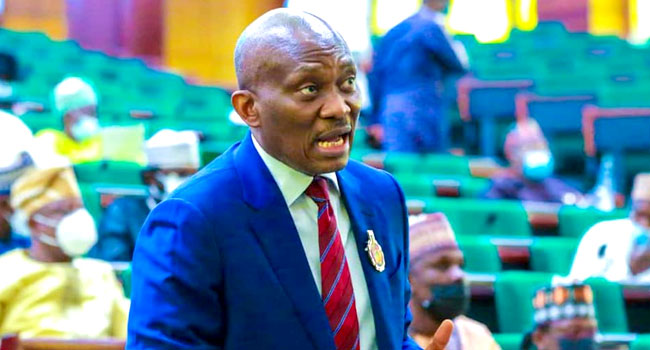 The minority caucus of the House of Representatives has joined its Senate counterpart to hand President Muhammadu Buhari a six-week ultimatum to fix insecurity or face impeachment in the National Assembly.

Minority leader of the House of Reps, Ndudi Elumelu, revealed this after a closed door meeting of the joint minority caucus of the National Assembly on Thursday.

Elumelu said the signatures will be gathered to impeach the President if the security situation is not addressed.

He also drew attention to the general state of the nation, including the exchange rate and aviation crisis.

On Wednesday, Senators, mostly drawn from the minority caucus, had staged a walkout on the floor of the red chambers.

Minority Leader of the Senate, Philip Aduda had raised a point of order asking the Senate President, Ahmad Lawan, to discuss the security situation in the country and the impeachment of President Buhari.

But Lawan, who presided over the plenary, declined the request of the minority leader, saying the point of order raised fell flat on its face.

At a briefing after the walkout, the Senators issued a six-week ultimatum to the President to tackle insecurity across the country or face impeachment.