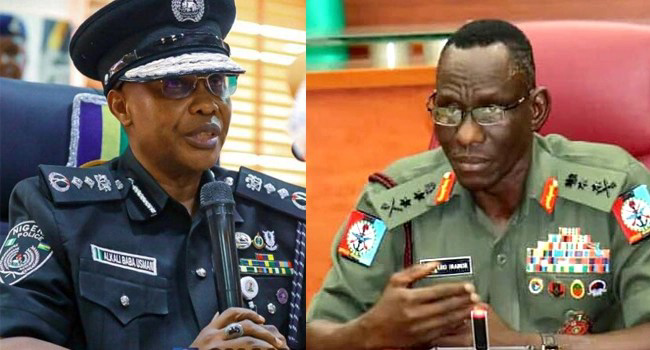 The Inspector-General of Police Usman Alkali Baba, Chief of Defence Staff General Lucky Irabor, and top officials of the Nigerian Railway Corporation, have visited the site of the terrorist attack on a train at Dutse forest in Chikun Local Government Area of Kaduna.

The two service chiefs were received by the General Officer Commanding one, Mechanised Division of the Nigerian Army along the Kaduna-Abuja highway.

From there, they proceeded to the scene of the attack located about three kilometres away from the expressway.

While the casualty figure is yet to be confirmed, several persons are feared dead.

The incident happened around 7:45 pm on Monday at Dutse village in Chikun Local Government Area, just a few kilometres from the Rigasa train station, which is the last transit point of the train.

The bandits were said to have opened fire, shot sporadically on the train, and later gained access into the train.