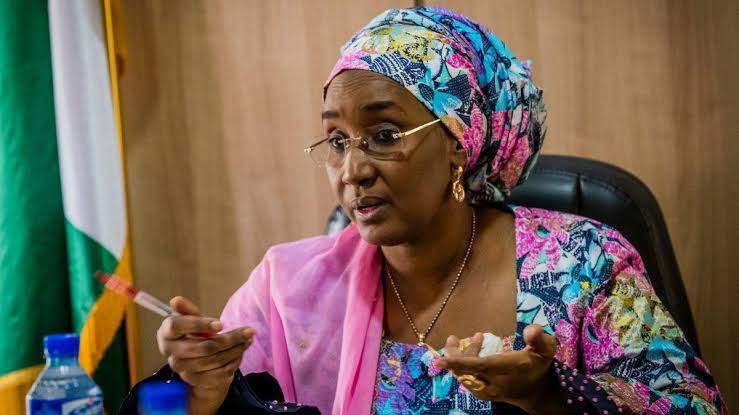 The Minister of Humanitarian Affairs, Disaster Management and Social Development, Sadiya Umar Farouq has disowned N206 billion Inserted into her Ministry’s 2023 Budget by the Ministry of Finance.

Hajia Farouk who appeared before the Senate Committee on Special Duties to defend the 2023 Budget claimed that the Ministry requested some projects funds for the North East Development Commission (NEDC) and National Social Safety Net Project in 2022 budget which was not released , but the Ministry is surprised that money put for the same projects in 2023 is now times 10 of the entire 2023 Budget of the Ministry.

Trouble started when one of the Committee members Senator Elisha Abbo asked the Minister about N206 billion in the budget.

The Minister in her response said, “Yes we made a request for funds for the projects in 2022 which was not released and part of it is for the NEDC.

“The money was not released and now we have seen it recurring by almost 10 folds we are also going to clarify from the ministry of finance to know why this increase despite the fact that the previous year, the money was not even released for the projects.

“This is all I can say for this. I cannot really give full details of how this amount is going to be utilised because it is something that was negotiated between the ministry of finance and the world bank.”

But, Senator Abbo who was shocked by the Minister’s response said that the country can’t continue to borrow money and plunge the country into debt.

He said, ” This is serious. We cannot continue to borrow money and plunge this country into debt for our children to come and pay without investing in what they will see.”

The Chairman of the Committee, Senator Yusuf Yusuf, therefore, moved a motion to summon Minister of Finance, Zainab Ahmed to come and give an explanation about the N206 billion inserted in the Ministry’s budget.

Senator Yusuf said, ” I want to move a motion that the minister of finance should appear before this committee to furnish this committee with details of what they intend to do with N206 billion in the 2023 budget.

“Now that the minister has said that she is not in charge of negotiation with the World Bank and of course she is not, the minister of finance must appear before us and explain what the huge amount is meant for