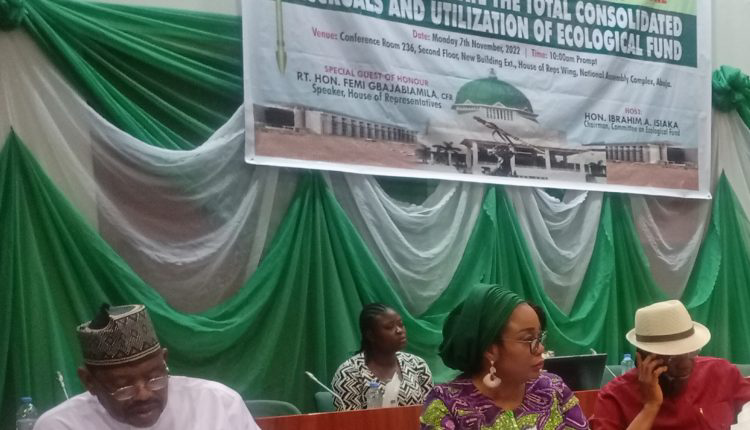 The House of Representatives says it might henceforth involve anti-corruption agencies in the recovery of ecological funds in Nigeria.

This was the consensus by members of the House of Representatives Committee on Ecological Funds at its resumed Investigative Hearing on the Need to Investigate the Total Consolidated Accruals and Utilisation of the Ecological Funds, in Abuja.

The members who were not impressed with the continued absence of relevant agencies at the investigative hearing of the committee said that it was important to prove to the absenting agencies that the investigation was a serious business.

While addressing the agencies present, the Chairman of the committee, Hon Ibrahim Isiaka, said that the ecological fund was not free money meant to be squandered.

He said that anyone that receives the fund must be made to account for it.

“By our next adjourned date, those that we have invited that have not shown up; by the mandate and by a resolution taken by the committee that the EFCC should be part of us in our next adjourned date, to take note of our proceedings and we are just placing them on notice. We are going to write them formerly. And this is pending when we are going to submit our report on the floor of the house for further legislative actions”. Hon Isiaka said.

The Director General of the National Agency for the Great Green Wall, Dr Yusuf Maina-Bukar, said that the agency has been working towards achieving its mandate. He said that the funds received from the ecological fund were properly utilised.

Also speaking at the hearing, representatives of the Federal Capital Territory said that the FCT received 1% of the ecological fund. He said that the funds were distributed to the three area councils that have ecological issues.

In his ruling, the chairman of the committee ruled that the Nigeria Hydrological Service Agency borrowed some funds from the ecological fund and must come and explain to the committee how the funds were spent.

Nigeria Hydrological Service agency is not even by law supposed to be drawing money from the ecological funds. And they said the money given to them was on loan. We have said they should come and let us see how they are going to repay that money into the ecological Fund.

The federal road maintenance agency neither responded nor cause appearance on about N 2billion they claimed to have used to repair a road in Edo State”, he added.

PREVIOUS POST APC unveils Tinubu/Shettima Crowdfund App for 2023 campaign donations
NEXT POST Osinbajo: Corruption Is A Disaster All Nigerians Must Unite Against