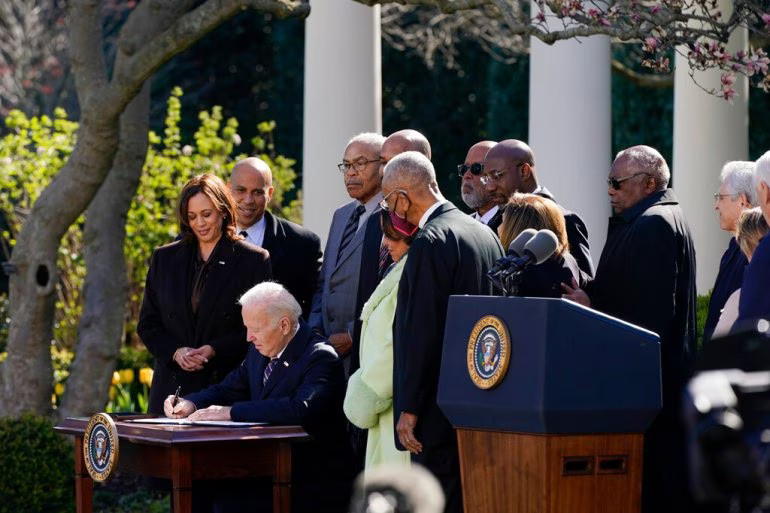 United States President Joe Biden has signed into law the first federal legislation that makes lynching a federal hate crime in the country after civil rights groups pushed for such a measure for more than a century.

The legislation is named after 14-year-old Emmett Till, who was brutally murdered in a racist attack in Mississippi in 1955 – an event that drew national attention to the atrocities and violence that African Americans faced and galvanised the US civil rights movement.

“No federal law expressly prohibited lynching until today,” Biden said on Tuesday after signing The Emmett Till Anti-Lynching Act during a ceremony in the White House’s Rose Garden.

The new law will give authorities more tools prosecute hate crimes as a “lynching” when a conspiracy results in death or serious bodily injury. It provides for a maximum sentence of 30 years in prison and fines.

Civil rights group NAACP has described lynching as “violent public acts that white people used to terrorize and control Black people in the 19th and 20th centuries, particularly in the South” of the country.

“Lynchings typically evoke images of Black men and women hanging from trees, but they involved other extreme brutality, such as torture, mutilation, decapitation, and desecration. Some victims were burned alive,” the group says on its website.

Al Jazeera’s Rosiland Jordan, reporting from Washington, said lynching “was a very heinous way of terrorising the newly liberated African American community in this country – and it was effective”.

That was echoed by US Vice President Kamala Harris, who said during Tuesday’s signing ceremony that the victims of lynchings were targeted “because they were working to build a better America”.

“Those folks who were killed, they were business owners, creating economic opportunities in their community by which all would prosper and benefit,” Harris said. “They were teachers educating the next generation of America’s leaders. They were activists who were defending the sacred freedom to vote.”

The legislation comes at a time when the US continues to confront systemic racism in the wake of Black Lives Matter protests that rocked the nation in 2020 following the police killing of George Floyd in Minneapolis.

It had failed to pass such legislation nearly 200 times, beginning with a bill introduced in 1900 by Representative George Henry White, who was the only Black member of Congress at the time.

The NAACP began lobbying for anti-lynching legislation in the 1920s. A federal hate crime statute eventually was passed and signed into law in the 1990s, decades after the US civil rights movement.

The Emmett Till Anti-Lynching Act was passed in the House of Representatives by a vote of 422-3 earlier this month after clearing the Senate by unanimous consent.

“For the first time in U.S. history, we are finally [to] make lynching a FEDERAL hate crime. And we are doing it in Emmett Till’s name,” US Congressman Bobby Rush wrote on Twitter on Tuesday before the bill was signed. “It’s time to right this historic injustice.”

Till had travelled from his Chicago home to visit relatives in Mississippi in 1955 where he was kidnapped, beaten and fatally shot. A large metal fan was tied to his neck with barbed wire before his body was thrown into a river.

His mother, Mamie Till, insisted on an open casket at the funeral to show the brutality her child had suffered.

Till was accused of whistling at the wife of Roy Bryant, who was tried for kidnapping and killing the teenager. Bryant was acquitted by an all-white jury even though witnesses had seen him and his half-brother, JW Milam, take Till from his relative’s home.

Bryant and Milam later told a magazine writer that they had kidnapped and killed Till.

Till’s relatives have presented Mississippi authorities with a petition signed by 250,000 people calling on the state to re-open its investigation into the killing.

They believe Bryant’s former wife, Carolyn Bryant Donham, now in her 80s and living in North Carolina, played a key role in Till’s slaying. Bryant and Milam have both passed away.

PREVIOUS POST Tesla Gets a Big Win That May Cost Legacy Carmakers Millions
NEXT POST Ukraine captures one of Russia’s most advanced electronic warfare systems, which could reveal military secrets, reports say