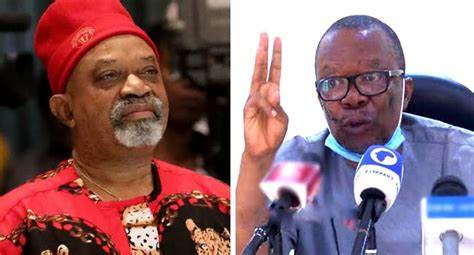 The National President of the Academic Staff Union of Universities, Prof Emmanuel Osodeke, on Tuesday, criticised the Minister of Labour and Employment, Chris Ngige, over his alleged authorisation of the part-payment of salaries to members of the union, following the suspension of its seven-month strike in October.

This comes after ASUU in October suspended its eight-month strike in line with an order by the National Industrial Court for the lecturers to return to work.

ASUU, on Monday, stated that it would embark on a one-day nationwide protest over the part-payment.

Asked what role the Minister of Labour currently plays in the matter, the ASUU president said, “He has nothing. He’s an interloper. If we’re calling him a conciliator, it has gone beyond him.

“And we have found that it was he who actually wrote to the Minister of Finance personally, not directed, that they should stop our salary. It’s just personal. We are surprised because, having taken the case to court, by all rights, he has hands are tied. He has no business with what we do.”

Osodeke expressed confidence that the agitations of the union would be resolved in the interest of students, parents, and the country.

“But to our surprise, the Accountant General Office decided to pay what some people have referred to as half. It’s very sad because professors who are on the same salary scale got varying amounts, N200,000, N180,000, N90,000 and what have you,” he said.

The ASUU president confirmed that the part payment was the first salary paid to union members since the strike commenced.

“It is the Minister of Education, who we are under, and the Speaker on whose intervention we called off the strike because of the issue we said that, one, they are going to pay us backlog of our salaries because ASUU is different from another union,” he said.

FG says no bias in part-payment

The Federal Government has since defended the pro-rata payment to ASUU members in October, saying they cannot be paid for work not done.

Ngige, through the spokesman for the Ministry of Labour and Employment, Olajide Oshundun, dismissed media reports that the government was biased in paying the university teachers.

“They were paid in pro-rata to the number of days that they worked in October, counting from the day that they suspended their industrial action,” the statement partly read.

“Pro-rata was done because you cannot pay them for work not done. Everybody’s hands are tied,” he said.

‘No work no pay is legal’

Also, the Speaker of the House of Representatives, Femi Gbajabiamila said the ‘no work no pay’ policy embarked on by the Federal Government during the period of strike is premised on the law.