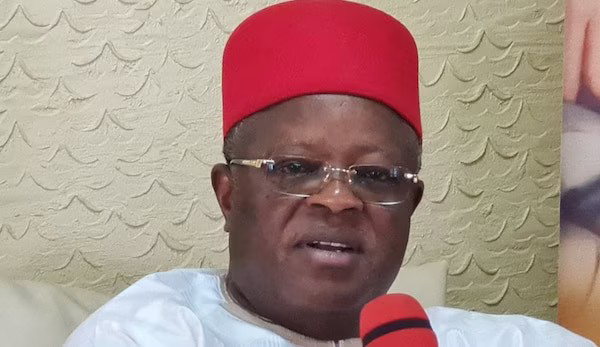 The Ebonyi State, David Umahi, on Wednesday withdrew his uncomplimentary remarks about Justice Inyang Ekwo of the Federal High Court, Abuja, who ordered his removal from office 24 hours earlier.

The judge had on Tuesday ordered the governor and his deputy, Kelechi Igwe, to vacate their offices immediately following their defection to the All Progressives Congress (APC) about two years ago.

Shortly after the judgement, Umahi accused the judge of carrying out a hatchet job for the Peoples Democratic Party (PDP).

He described the ruling as “jungle justice” and insisted that nobody could remove him as governor of Ebonyi State.

“Nobody can remove me as the governor of the state as we know where the judgement came from.

“Justice Ekwo has more than 10 cases against the state government and we will see where this leads him,” Umahi had said.

But the comments did not go down well with the NBA which demanded an apology from the governor.

Umahi, who addressed APC members at a solidarity rally in Abakiliki, recanted his earlier statements, saying they were not directed at Justice Ekwo but at PDP lawyers for allegedly “misleading the judge.”

He said: “I am using this opportunity to let Nigerians know that nobody castigated the judge and we will not and because the matter was not before any judge

“I’m still the Governor of Ebonyi State and I’m still working. I said the lawyers of PDP are the ones doing forum shopping and I’m going to write against the lawyers to NBA to discipline them because the judge was misled. The blame was not on the judge. The blame is on the PDP lawyers who misled the judge.

“We said we will obey the judgement in Ebonyi State. We will appeal the judgement of Abuja. We didn’t say we will disobey otherwise we would have not appealed.

“We are before the Appeal of Enugu State and that of Abuja. We have also filed a stay of execution. So, we are still the Governor and Deputy Governor of Ebonyi State.”