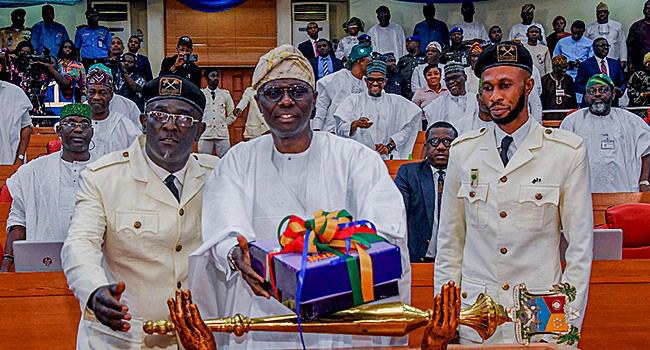 The governor, who described the state as a “national asset”, said the benefits of Lagos transcend a region of the country as all Nigerians enjoy the state’s prosperity in one way or the other.

Sanwo-Olu made this known at the 2023 Budget Estimates Presentation to the Lagos State House of Assembly in the Alausa area of Ikeja, the state capital.

Christened the ‘Budget of Continuity’, the governor said its effective implementation will be for the benefit of all.

He said, “Lagos continues to experience increased pressure on social services due to unhindered migration from other parts of the country.

“It is for this reason that I always sought and I will still continue to reiterate the need for Lagos to be accorded a special status as a national asset.

“As a microcosm of the entire country, Lagos deserves all the support it can get at the national level.”

“The development of any megacity like ours is the responsibility of both the public and private sectors, and to this end, we will continue to explore public-private-partnership strategies in the provision of infrastructure, social services, and the conversion of challenges to opportunities within the context of scarce resources.

I am indeed very grateful to the members of the organized private sector who have always heeded our calls for partnership and shown great and uncommon civic engagement with our government,” the governor stated.

Sanwo-Olu said the Rice Mill in Imota will be commissioned by the end of the year.

“It also gives me pleasure to announce that our 32mtph Rice Mill in Imota will be commissioned this December. The largest of its kind in Sub-Sahara Africa, this Rice Mill, when completed will create about 350,000 direct and indirect jobs along the rice value chain,” he said.

The governor acknowledged that the state government has gotten the approval of the Federal Government for the establishment of the Badagry Deep Sea Port.

He further said the Lekki Deep Sea Port will be completed before the end of 2022, saying the port has “three times the capacity of the Apapa Port and will give Lagos almost 50% of the shipping logistics volumes in West Africa, up from 22% today”.

Also in October of the same year, he demanded one per cent share in the revenue allocation formula arguing that the special status of Lagos has multiplying effects on the entire country.

Currently, the Federal Government gets 52.68 per cent, states get 26.72 per cent while local governments get 20.60 per cent.

According to the National Bureau of Statistics (NBS), Lagos, with over 20 million people, collected the highest Internally-Generated Revenue (IGR) of N753.46 billion in 2021 followed by the FCT which collected N131.92 billion.