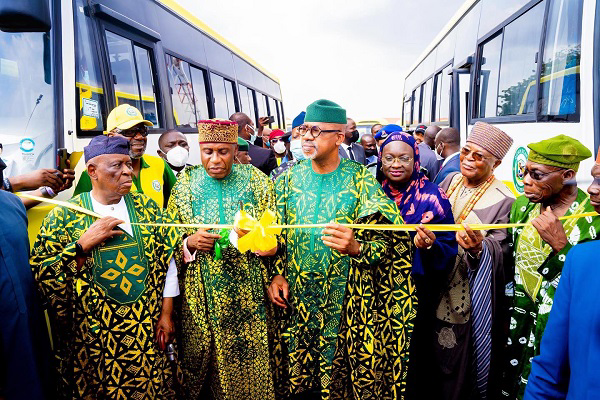 The official launch of the buses fitted with Wifi and other gadgets, the governor observed is in line with the transport master plan aimed at providing efficient and affordable means of moving people from one location to another.

The event was attended by the Minister of Transportation, Rotimi Amaechi.

Speaking further at the event held at the Arcade Ground, Governor’s Office, Oke-Mosan, Abeokuta, Abiodun also disclosed that a Memorandum of Understanding (MoU) would soon be signed between the state and a private firm for the construction of the Olokola Seaport.

“It is important to know that the whole essence of the transportation master plan is for us to efficiently move people either intra-state or inter-state. We are the industrial capital of this country and neighbour to the biggest economy which is Lagos State. We see the cross border migration everyday and the trouble our people go through.

“Our transportation master plan has proffered suggestions and solutions for us to deal with this. Today, we are launching these mass transit buses. The pilot phase will start from Abeokuta and we will expand it to other cities”, the governor noted.

He said his administration is also developing a Bus Rapid Transit (BRT) lanes in conjunction with the Lagos State government under the Lagos-Ogun Joint Development Cooperation, adding that the State buses would move people from Abeokuta through Mowe, Kara axis to Marina as well as from Ifo and Ado Odo-Ota axis to Lagos and vice versa.
.
“Very soon, we will be signing a Memorandum of Understanding with a private sector player for the construction of the long awaited Olokola Port. The Olokola Port will soon be a reality. We are also committed to having water transportation by having water taxies.

“This is why we have come up with a multi-modal Transportation Master Plan that we launch today. This transport policy takes into consideration the short, medium and long term approaches to the development of our transport sector. This will include road, rail, water and air transportation plans for the State”, he explained.

He emphasised that the multimodal transportation master plan of his administration stems from the comprehensive and well researched Urban Transport Policy and Strategic Transport Intervention Plan.

In hi remarks, the Minister of Transportation, Mr. Rotimi Amaechi, lauded the state government for operating a purposeful government, saying all the legacy projects carried out by the governor would continue to speak for him after leaving office

The Minister who reiterated the commitment of the government at the center in improving on transportation system across the country, informed that the construction of Lagos -Calabar rail line that would pass through Lekki Deep Seaport down to Epe township, would soon commence.

He stressed that the government has continued to implement the rail line master plan project initiated by President Olusegun Obasanjo regime.

Former governor of the state and National Leader of the All Progressives Congress (APC), Aare Olusegun Osoba, who spoke on behalf of the former President Olusegun Obasanjo, noted that Abeokuta has always been a commercial centre, adding that with the launch of the mass transit buses, the present administration has succeeded in restoring the past glory of the state in terms of transportation.

He declared that he would continue to support the Abiodun-led administration in its efforts at meeting the needs of the people.

In his remarks, the Alake of Egbaland, Oba Adedotun Gbadebo, appreciated the state government for providing modern system of transportation, saying the scheme would go a long way at alleviating the suffering of the people from moving from one place to another.