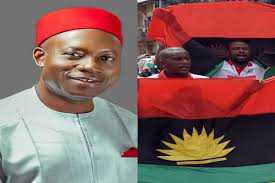 Governor Charles Soludo of Anambra state has pleaded with the Indigenous People of Biafra, IPOB militants to lay down their arms in exchange for pardon.

Since he became governor last month Soludo, a former Central Bank of Nigeria, CBN Governor has sued for peace from the militants, who last week agreed to end the weekly sit-at-home in all the five states in the south east.

As part of the governors’ efforts to stop people from observing the sit-at-home order, Soludo had recently threatened the state civil servants with sack if they continued to abandon their offices.

None of the threats seemed to have worked so far in Anambra and other south east states where residents have continued to observe IPOB’s order not to leave their homes.

For instance, violence has continued in neighbouring Imo state where suspected members of IPOB and its militant arm the Eastern Security Network, ESN have continued to unleash mayhem on their communities.

Last week, the Imo state Police Command successfully repelled a deadly attack by suspected members of the proscribed IPOB, on the Mbieri Police Division, barely few days after the militants burnt down the home of a commissioner in the state.

Governor Soludo said he’s now prepared to offer amnesty to the aggrieved militants who are demanding for the State of Biafra, in exchange for their weapons. Surrender your guns, Governor Soludo, who promised last week to lead other four other governors from the region to President Muhammadu Buhari to demand the release of detained IPOB leader, Mazi Nnamdi Kanu said.

The governor disclosed this during an interview with Channels Television on Sunday, while speaking on the spate of violent attacks in the five states in the region.

The governor said there is need to harmonise peace initiatives among all the factions of the agitators.

He stated further that, “Within the agitation movement, we have to agree that there are now factions. There is the one led by one guy in Finland called Simon Ekpa. IPOB has come out to accuse that group of being behind much of the criminality in the South-East,” Soludo said.

“A lot of them in the bush out there are having camps here and there. They come out to kidnap and kill. Once we isolate all the groups that are not involved in this, then we can focus on the criminals.

The only way out of the problem, the former CBN Governor said is to pursue peace with the militants, noting that violent attack on the agitators by government forces cannot lead to peace.

He explained that the agitation for a separate state of Biafra from Nigeria cannot be killed through the barrel of the gun.

According to him, “We have also offered them some kind of amnesty. Come out, give us your guns, we are prepared to give you training in whatever skills, even if we have to raise resources to empower you to become useful partners in the development of society.”

“A time comes when you realise that you cannot shoot an ideology with a gun. When you see it exclusively as a law enforcement matter, then you miss the point. You’ve got to engage them.

“We are taking it very seriously with an open manner to engage everyone and believing that everyone has some contribution to make. To the criminals, we are offering them an olive branch to repent,” the governor said