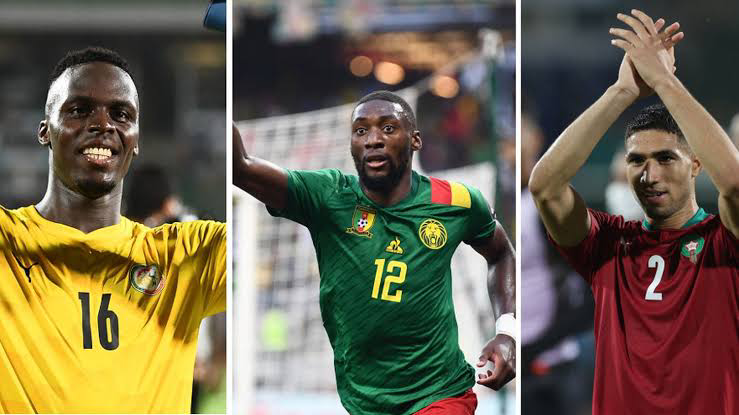 Morocco, Cameroon and Tunisia joined Senegal and Ghana as the African nations who will participate in the 2022 FIFA World Cup in Qatar.

Sadio Mane scored the final penalty against Egypt in a shootout to end Liverpool teammate Mohamed Salah’s dream of playing at the global showpiece later this year.

Ghana shocked Nigeria as they secured their ticket in a 1-1 draw, with the away goals rule being implement at the final whistle.

Azzedine Ounahi scored twice as Morocco trounced the Democratic Republic of Congo 4-1 in Casablanca on Tuesday to reach the 2022 World Cup finals in Qatar.

Tarik Tissoudali and Paris Saint-Germain full-back Achraf Hakimi also netted for the Atlas Lions, who qualified 5-2 on aggregate after the first leg finished 1-1 in Kinshasa four days ago.

Karl Toko Ekambi scored in the fourth minute of added time at the end of extra time to gave Cameroon a dramatic 2-1 win over Algeria in Blida and a place at the 2022 World Cup.

Eric Maxim Choupo-Moting put eight-time qualifiers Cameroon ahead in the 22nd minute and they retained the lead until the 118th minute when Ahmed Touba equalised in the second leg of a play-off.

But with Algeria leading 2-1 on aggregate having won the first leg 1-0 last Friday, and seemingly set for Qatar, Toko Ekambi struck.

Tunisia secured a place at the 2022 World Cup in Qatar despite being held 0-0 at home by Mali on Tuesday in the second leg of an African play-off.

A pre-match warning by Tunisia coach Jalel Kadri to his team that the return match would be even tougher than the first leg in Bamako last Friday proved spot on.

Having built a 1-0 lead in Mali through a Moussa Sissako own-goal, Tunisia were unable to build on their aggregate advantage and scraped through for a sixth appearance at the finals.Teams qualified so far for the 2022 World Cup in Qatar following Tuesday’s playoff matches:

NORTH AND CENTRAL AMERICA AND CARIBBEAN

– 27 qualifying berths out of 32 decided