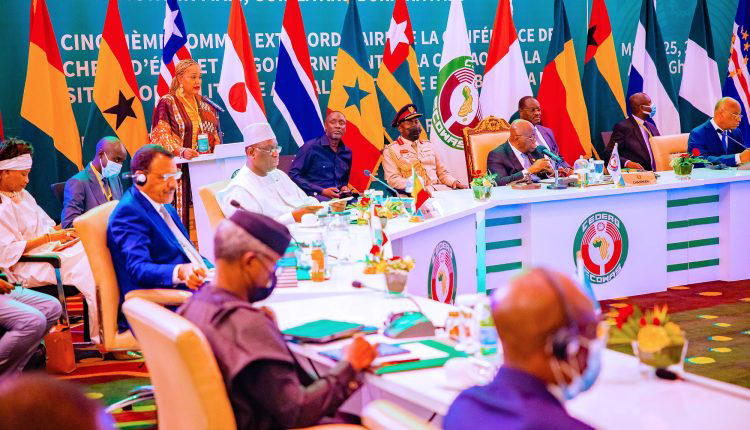 The Economic Community of West African States (ECOWAS) on Friday convened a meeting of heads of state and government of the regional bloc to discuss the political situations in Mali, Guinea, and Burkina Faso.

“We are here to take stock of where we are with our three member states and take appropriate decisions on the way forward,” ECOWAS chair Nana Addo Dankwa Akufo-Addo told the opening session of the fifth Extraordinary Summit of the Authority of ECOWAS Heads of State and Government on the political situations in the three countries.

Former Nigerian President Goodluck Ebele Jonathan, who is the ECOWAS mediator for Mali, is expected to speak on a progress report on the political transition in Mali.

Leaders of member states of the regional grouping are expected to discuss reports on recent political developments in the three countries, which have been facing political instability in the past two years.

The leaders will receive a report from the ECOWAS mediator in Mali, Nigeria’s former president, Goodluck Jonathan, who visited Bamako between March 18 and 20 and met with the head of the military government in Mali.

The heads of state and government will also review issues in Guinea and Burkina Faso.

Having condemned the military takeover of government in Mali, Guinea and Burkina Faso and imposed sanctions on the military governments in those countries, the ECOWAS leaders, at their last meeting in February, affirmed that only democratically elected authorities in the region would be recognized and supported by the body.

In his opening remarks at the summit, Chairman of ECOWAS, President Nana Akufo-Addoh of Ghana, said that the meeting was convened “To take stock of where we are with our three recalcitrant member states, Mali, Guinea and Burkina Faso and take appropriate decisions on the way forward.”

President Akufo-Addoh said that the response of the leaders to the invitation to attend the summit at a short notice was “A clear indication of your determination to assume your responsibilities for the security of ECOWAS.”