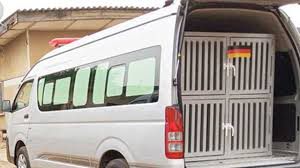 The two Toyota Hiace buses donated by German government, through the German Federal Criminal Police Agency (BKA), have 12 installed dog transport cages worth N58 million and it is expected to ensure mobility of the NDLEA K9 unit.

Present at the event was the Consul General of the Federal Republic of Germany in Lagos, Dr. Bernd von Muenchow-Pohl, head of the Lagos BKA office, Mr. Herbert Maassen and a representative of the Chairman and Chief Executive of the agency, Brig. Gen. Mohamed Buba Marwa (Retd).

Speaking during the event at the NDLEA office in Nigerian Aviation Handling Company (NAHCO) premises, Lagos, the Consul General of the Federal Republic of Germany in Lagos, Dr. Bernd von Muenchow-Pohl stated that the German Foreign Office is promoting security and the rule of law worldwide and combating drug-related crime in Nigeria remains one of its priority areas.

“This marks another small, yet important mile-stone for this project to enhance the use of sniffer dogs here in Lagos, a project with a German contribution of about 5 million euro in total,” he said.

Receiving the keys to the buses, the Chairman and Chief Executive of the National Drug Law Enforcement Agency (NDLEA), Mohammed Buba Marwa, represented by the Director General Operations and Investigations, Mr. Adeyemi Adeofe, said the NDLEA Canine Unit has enjoyed technical, logistics and training support from the German government.