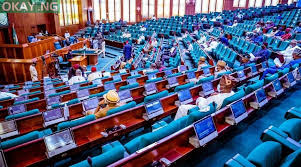 The House had voted against the Bills Acts to alter the Provisions of the Constitution of the Federal Republic of Nigeria, 1999 to Provide for Affirmative Action for Women in Political Party Administration; expand the Scope of Citizenship by Registration and provide Criteria for Qualification to become an Indigene of a State in Nigeria.
Since last Wednesday, hundreds of of women have besieged the National Assembly, blocking the main entrance to the nation’s Parliament premises within the three arms zone to protest the death of the bills.

The women had vowed that they were not going to leave the protest ground until the National Assembly leadership addressed them and have remained faithful to their resolve.However, the House’s Speaker disclosed that the three bills, “Expansion of the Scope of Citizenship by Registration, 35%

Affirmative Action for Women in Political Party Administration and Qualification to become an Indigene of a State in Nigeria” will be reconsidered in the coming weeks by the lawmakers.Consequently, Chairman of the House Committee on Rules and Business, Abubakar Fulata moved a motion to recede the rejected bills and was seconded by the Deputy Minority, Leader, Toby Okechukwu while members unanimously adopted it when put to a voice vote.

Speaking with journalists after the executive session, Babajimi Benson, Chairman of the House Committee on Defence, said the decision of the Green Chamber was in solidarity with the female folks on the occasion of the International Women Day.
Benson however, said the House did not rescind the decision on the Bill to Provide for Special Seats for Women in the National and State Houses of Assembly because of the constitutional constraints, hence there is provision for the number of legislatives seats for each state.

He said: “If you talk about creating extra seats, the Constitution itself states the maximum number. You must have a constituency that is available to run; you know what I’m saying.“So it’s an ongoing conversation that we are also critically looking at. Nobody wants to leave the women behind. So, we will do our best to ensure that we try and give them the pride of place they truly deserve.”