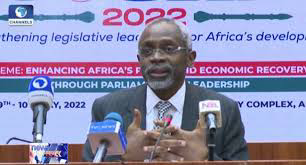 The Speaker of the House of Representatives, Hon. Femi Gbajabiamila, has said that the Conference of Speakers and Heads of African Parliaments (CoSAP) is out to push for total debt cancellation by creditor-nations as opposed to debt relief or review.

Gbajabiamila, who was speaking on day two of the ongoing 1st CoSAP in Abuja, Nigeria, explained that the body would want all debts owed by African countries cancelled.

The Speaker was contributing to discussions on the first plenary topic of the day, ‘Financing Africa’s pandemic Response: Legislative Imperatives and Interventions’, anchored by the Country Representative in Nigeria, World Health Organisation (WHO), Dr Walter Kazadi Mulombo.

The session was chaired by the Speaker of the National Assembly of South Africa, Hon. Nosiviwe Mapisa-Nqakula.

He noted that this would help the countries to start from “reset the button to zero”, meaning they had no debts outstanding against them.

Compared to debt review or relief, Gbajabiamila told his colleagues that in the case of the latter, the debts would still be outstanding, except that there would be some alterations, adjustments or even postponement of the repayment schedules

“We want to reset our buttons to read from zero. That is the position, and I appeal that we all support this push,” he stated

Participants at the session backing Gbajabiamila’s position spoke on the need for parliaments to step up their oversight duties in tracking how the executive spent the loans taken on behalf of countries, which ended as debt burdens or traps.

Some noted that in countries that secured debt reliefs, the parliaments must interrogate how the money returned to them was spent

They pointed out that the creditor-nations, in considering the appeals for debt cancellation or relief, would look at several factors, including accounting for how the loans were utilised and the compliance of countries to agreements signed at the inception of the loan requests.

Meanwhile, as part of his recommendation for tackling or preparing for pandemics, Gbajabiamila suggested setting aside a percentage of the health budget for vaccine research and manufacturing by African nations.

He said this could also be legislated to make compliance mandatory.

The Speaker also recommended the establishment of an African Centre for Vaccine Research and Production.

He explained that the joint centre could be located anywhere on the continent, where all African countries could contribute to its development.