Ganduje declares support for Tinubu, says northerners have no other option 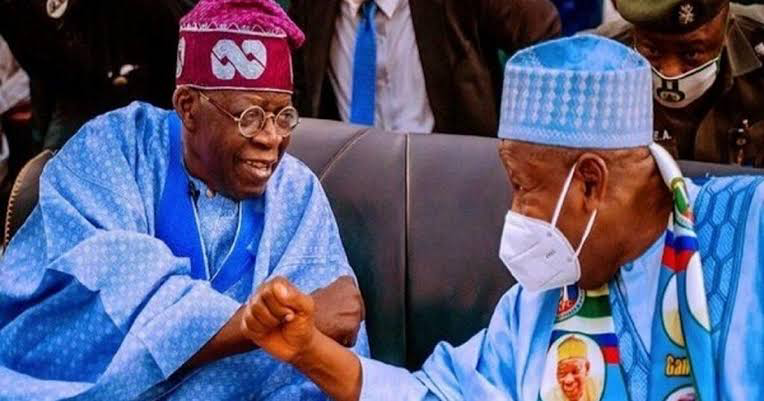 Governor Abdullahi Ganduje of Kano State has said Northerners have no other presidential aspirant to support than the national leader of the All Progressives Congress, Bola Tinubu.

Ganduje made the remark at the inauguration of an office for Northern Youth Professionals for Tinubu, an organisation that supports Tinubu’s ambition, held along Hadeja Road in Kano on Monday.

The governor, who was represented by the Managing Director of Kano Road Traffic Agency, Dr Baffa Dan’agundi, said it has become necessary for Northerners to reciprocate the gesture of the people of South-West in 2015 when they supported Major General Muhammadu Buhari (retd.)  to become the President.

He said, “I don’t have much to say than to align myself with the statement made by Senator Kashim Shettima of Borno State when he said Northern Nigeria has no option than to support the Yoruba race first and in the whole of Yoruba race, who”? It is Bola Tinubu.

“If I ask you to give one person who supported the Northern candidate, Muhammadu Buhari, there is nobody else you can mention other than Bola Tinubu.

“It is time for us to show whether we are truly sons of our parents or not. So, this is the time we are with Bola Tinubu.

“His Excellency, Dr Abdullahi Ganduje is part and parcel of this struggle, so we are with Bola Ahmed Tinubu

“It was Bola Ahmed Tinubu who persistently stood firm and ensured that the people of the South West supported Muhammadu Buhari from the APC primary up to the Presidential election where he emerged victoriously.

He said the time has come when Northerners would show the world that they are supporting Tinubu’s presidential ambition to enable him to take the country to greater heights.

In his remark, the NYTP Coordinator, Abdullahi Yakasai, said the reason they were supporting Tinubu’s presidential ambition was because of his love for the development of Nigeria.

He noted that Tinubu is a patriotic Nigerian and if given the mandate to rule the country, “he would address the lingering security challenges and bring socio-economic development to the country.”

“Northerners have no better presidential candidate to support than Tinubu because he is the one who supported and empowered the youth by providing them job opportunities in addition to allowing them to participate in politics without any discrimination,” he said.

PREVIOUS POST Trump’s Truth Social App Gets 170,000 Downloads In First Day
NEXT POST If I had not intervened, people would be trekking from Lagos to Abuja — Buhari