G-5 Governors Jet off to London for Strategic Meeting 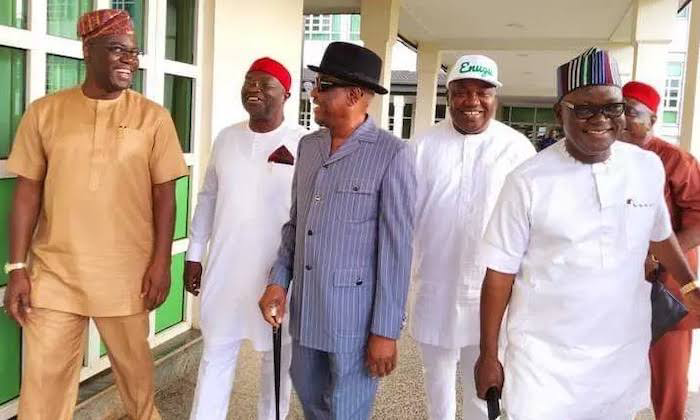 The group of five governors (G-5) elected on the platform of the Peoples Democratic Party (PDP) in what could be described as another jamboree, have travelled to the United Kingdom for another strategic meeting.

The group led by the Rivers State Governor, Mr. Nyesom Wike, has in continuation of its endless foreign trips, left the country for London in the early hours of yesterday morning.

The source noted that the governors would be back in Nigeria on December 30, for Wike to attend his scheduled meeting with Ogoni Council of Chiefs on December 31.

The Rivers State governor had ordered all traditional rulers in Ogoni, whether dead or alive, to attend the meeting, and that he would not tolerate any reason to be absent from the meeting.

The group of governors it was gathered jetted off from the Port Harcourt International Airport.

A top party chieftain in the state who pleaded anonymity, confirmed the trip yesterday.

“Yes, they left for UK early yesterday morning, but I can’t say the reason for the trip,” the source said.

The G-5 governors have been calling for the resignation of the PDP’s National Chairman, Dr. Iyorchia Ayu, as their minimum condition for peace in the party and to join the presidential campaign council of the party’s presidential candidate, Atiku Abubakar.

Wike, the leader of the quartet, has refused to accept his defeat at the party’s presidential primary in good faith.

Since he lost the primary and even the vice presidential slot, Wike has utilised the enormous resources at his disposal to mobilise four other governors to fabricate crisis in the party.

The aggrieved governors have insisted that it was unfair for the party to have the national chairman and presidential candidate from the north.

They had maintained that they would not go back on their call for Ayu to step down to pave the way for a Southerner to succeed him as the party’s chairman.

Wike had specifically boasted that Atiku would not win the election if he and his allies do not support his presidential ambition.

A source said Wike and his team would use the opportunity of the London trip discuss the way forward on the crisis rocking the party while in London.

The source added that from London, the group of governors would also visit Madrid, Spain.

Top on the agenda for the meeting is who they would support for president in the 2023 election.