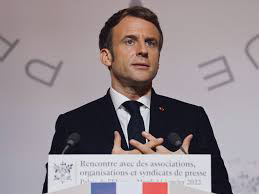 “I’m requesting your trust for a new mandate as the President of the Republic,” Macron said in a letter to the French people published in several local newspapers on Thursday evening. “I am a candidate to invent, with you, in face of the century’s challenges, a unique French and European answer.”

French presidents typically delay announcing their candidacies to appear statesmanlike for as long as possible. But Macron, 44, held off longer than most as he positioned himself at the center of efforts to end the most urgent security crisis in Europe since the end of World War II. Writing a letter was a way to benefit from a “rally-round-the-flag effect,” Ifop opinion head Frederic Dabi told Le Figaro newspaper.

Buoyed also by France’s standout economic rebound, Macron is the clear favorite to win, with all polls showing him leading both the first and second rounds of the election.

It’s less certain who’ll face him. Republican candidate Valerie Pecresse appears to be the only candidate who could defeat Macron in a head-to-head battle, but her campaign has failed to take off, making it more likely he’ll be up against Nationalist leader Marine Le Pen or far-right political newcomer Eric Zemmour. The left imploded last time around when Macron carved out a place for himself in the political center.

Macron swept aside France’s political establishment in 2017, with a vision of hope and renewal that contrasted with the populist anger and toxic legacy of rival Le Pen, to become the country’s youngest leader since Napoleon.

The former banker went on to spend most of the next five years continuing to fend off challenges from the fringes of mainstream French politics, from violent protests by the Yellow Vests movement that demands greater economic equality to a culture-war clash with Zemmour.

In doing so, he tacked to the right on issues ranging from taxation to security and religion, concentrating nearly all the power in the presidency and losing some appeal among left-wing voters who helped get him to power.

Critics accuse Macron of failing to deliver on a promise to break from the old ways of doing politics. They often highlight the so-called “Benalla Affair” — in which he long protected an aide who beat up demonstrators in May 2018 — and lingering allegations of conflict of interest at the heart of government.

They also allege that key laws he pushed through following a spate of Islamist terror attacks stigmatized Muslims. Macron is sometimes seen as aloof and out of touch.

The ace up Macron’s sleeve, though, was an early bet on labor and tax reforms that may finally be delivering results, with low unemployment and economic confidence boosting French morale. There’s also a perception that he successfully steered the country through the worst of the coronavirus pandemic, arguably the defining issue for incumbent leaders around the world in the past two years.

Macron has spent more time on foreign affairs than any of his predecessors, as he tried to make the European Union a unified superpower and cast himself as the candidate best placed to handle international crises.

In trying to help avert war in Ukraine, Macron spoke to Russian President Vladimir Putin more than any other western leader. When critics said he was played by his Russian counterpart, the president’s public relations machine swung into high gear, with his official photographer releasing documentary-like images of his efforts on social media.View this post on Instagram

Macron also sought to negotiate an end to the war in Syria and the political chaos in Lebanon, albeit with limited success, and is recalibrating France’s role in the West African Sahel region in a bid to wind down France’s largest and most expensive overseas military operation by half.

In a sign Macron believes the race might be tighter than predicted, he’s been courting rural voters to add to his traditional base of affluent, urban residents. He tried to lessen the sting of the cost-of-living crisis, including by loosening the state’s purse strings and sacrificing the balance sheet of electricity company EDF to shield consumers from a rise in energy prices.

And he’s worked to soften his image, increasing his public appearances and speaking more to the press — even admitting in an interview late last year that he has made mistakes.

If he wins, Macron will be the first incumbent to prevail since Jacques Chirac 20 years ago.

PREVIOUS POST Updated: ‘I was invited, not arrested’ — Timaya speaks on hit and run incident
NEXT POST Zelenskiy says ‘Europe must wake up’ as Russian shelling sparks fire at Ukraine nuclear power plant