Forget flying cars! Manager of Japanese baseball team enters stadium on a flying MOTORBIKE that costs a sky-high £500,000 and can travel at speeds of 60mph for up to 40 minutes 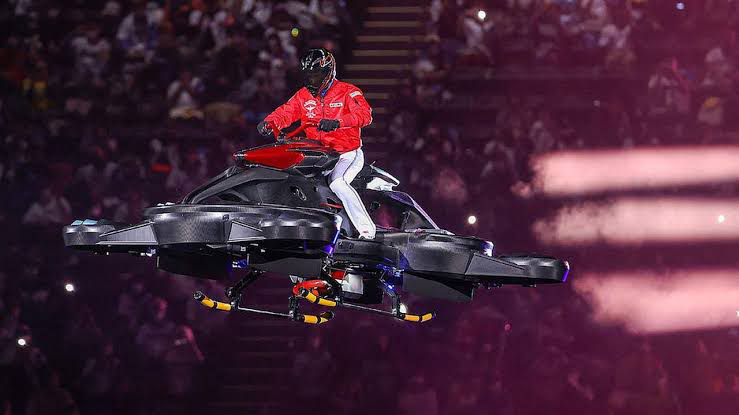 Tsuyoshi Shinjo, manager of the Hokkaido Nippon Ham Fighters, flew into the Sapporo Dome in Hokkaidō, Japan on Tuesday aboard the futuristic XTurismo bike.

New footage shows the manager of a Japanese baseball team entering his home stadium on a bizarre £500,000 flying motorbike-drone hybrid.

Tsuyoshi Shinjo, the new manager of the Hokkaido Nippon Ham Fighters, flew into the Sapporo Dome, Hokkaidō, Japan on Tuesday aboard the futuristic XTurismo.

The vehicle, described as a cross between a motorcycle, a drone and a vertical take-off aircraft, can travel at speeds of 60 miles per hour for up to 40 minutes.

XTurismo looks like a scaled-up drone, except for its motorbike-style seat designed to carry a single passenger.

Shinjo, a flamboyant 50-year-old who calls himself Big Boss, appeared for his team the Hokkaido Nippon Ham Fighters’ first home game of the season.

With the spotlight on him, Shinjo was wheeled into the stadium along the ground, took off and soared high above the field before landing about a minute later.

He then whipped off his helmet and tossed his red jacket to the ground with wild abandon before striding off.

Unfortunately, the epic stunt failed to bolster his team – the Hokkaido Nippon Ham Fighters lost 4-0 to the Saitama Seibu Lions, leaving them still searching for a first win of the season.

‘If you don’t spend time thinking about how to win baseball games rather than getting ready for flashy performances, you’ll get dragged down into the quagmire,’ one Twitter user wrote after Tuesday’s game, a 4-0 loss.

‘Enough performances – get results,’ wrote another.

Shinjo is a former professional baseball outfielder himself, and has officially registered his name with baseball authorities as Big Boss.

Last weekend, he emerged from a box covered in flashing lights when he came out for his team’s opening game against the Fukuoka SoftBank Hawks.

Shinjo, who had stints in Major League Baseball, was appointed Fighters manager ahead of the new season despite having no coaching experience.