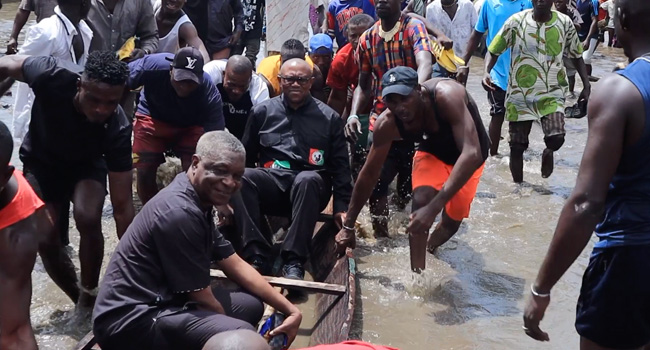 The Presidential candidate of the Labour Party (LP) Peter Obi has tasked the Federal Government to be proactive in mitigating the effects of the nationwide floods caused by the failure to prepare for the release of excess water from Cameroon and the heavily silted River Benue.

Obi disclose this in Makurdi, the Benue State capital, on Thursday where he had gone as part of his follow-up visit to the state governor Samuel Ortom during which he announced the suspension of his campaign to allow him to show support to victims of the flood disaster.

And according to his tweet yesterday he said I am in Benue State visiting and commiserating with the flood disaster victims. My solidarity and prayers are with them.

Although Obi had appealed to other presidential candidates to do the same, his visit to displaced persons both from the flood disaster and victims of herdsmen attacks camped in Daudu, brought hope to the displaced as he donated N5m to assist them.