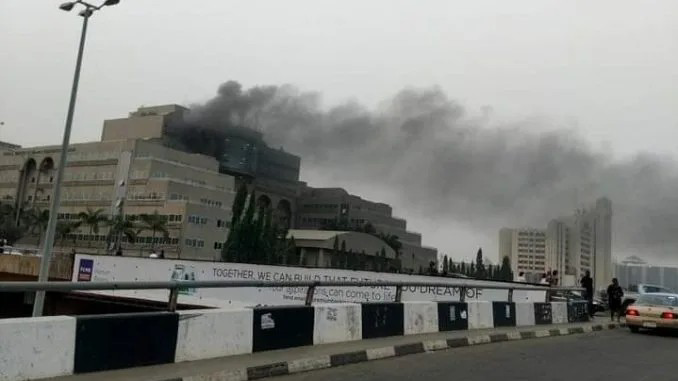 The fire incident at the Federal Ministry of Finance building, on Wednesday morning, was a minor one involving some inverter batteries and was quickly quenched, the federal fire service has said.

The spokesperson of the Federal Fire Service, Abraham Paul, told PREMIUM TIMES that the incident happened at the basement of the ministry where inverter batteries were kept.

He said no life was lost and no major injuries were sustained. But, not less than 20 high voltage batteries were destroyed.

“My men were there at 7 o’clock. It took us a few minutes. They called us from Garki, which is the headquarters of the Federal Fire Service and they also came down from the Federal Secretariat, which is very close. They also got a backup from Wuse Command,” Mr Paul said in an interview Wednesday morning.

In his account, the spokesperson of the inistry, Olajide Osundun, put the time of the incident at 6:50 a.m. when some staff of the ministry noticed smoke emanating from the basement.

Mr Osundun said the incident was put under control due to timely intervention from different quarters.

“The fire emanated from an exploded battery which then affected other batteries. About 10 to 16 batteries were affected. It only affected the battery compartment at the base of the ministry, it did not affect other parts of the building,” he told journalists at the ministry’s headquarters.

The incident at the ministry is coming almost two weeks after another government agency recorded a major fire outbreak.

Some offices at the headquarters of the Federal Mortgage Bank of Nigeria (FMBN) were burnt in the fire outbreak on February 10.