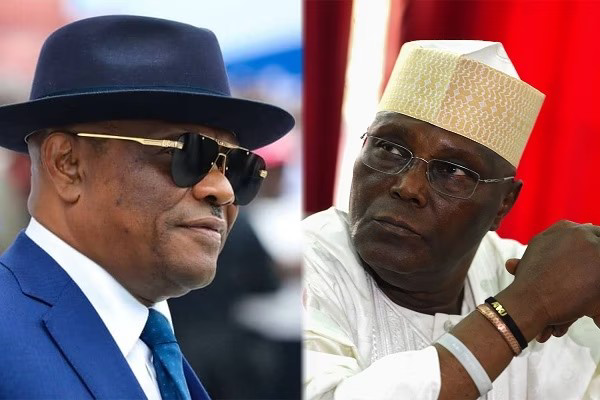 Security operatives attached to Rivers State Government House on Friday sealed a petrol station and two hotels owned by some associates of the presidential candidate of the Peoples Democratic Party, Atiku Abubakar, in Port Harcourt, the state capital.

SaharaReporters gathered that the three business owners are associates of Rt. Hon. Austin Opara, a former Deputy Speaker of the House of Representatives and former allies of Governor Nyesom Wike.

Opara, a PDP chieftain in Rivers State is currently in the camp of former Vice President Atiku.

Atiku and Wike have been at loggerheads over the emergence of Governor Ifeanyi Okowa of Delta State as the vice-presidential candidate of the PDP.

The governor’s camp had alleged that Atiku was ignoring him amid moves to reconcile the duo and had started meeting with some Rivers PDP chieftains, with the aim of isolating Wike ahead of the election.

This has further widened the scope of the crisis in Rivers PDP, with those that are opposed to the leadership of the governor standing the risk of facing the consequences of their actions.

Some of them have expressed their support for Atiku or any other candidates of their choice.

Wike has sacked some people in government allegedly not loyal to him.

For example, in a move to get at Senator Lee Maeba, it was learnt that he dissolved the board of the Elechi Amadi Polytechnic, Port Harcourt headed by the former senator.

Others said to be affected by the move by the governor to preserve his political dynasty include a former governor of the state, Celetine Omehia; Austin Opara and some others whom he removed as leaders of the party in their local government areas.

In a recent interview, Senator Maeba claimed that the reason behind Wike’s dissolution of the board of the polytechnic was because of his closeness to Atiku.

The view of the senator came against the background of the political intrigues that threw up the former vice president as the candidate of the PDP for the 2023 presidential election.

He said, “We have a candidate of the party who has the capacity to lead Nigeria out of crisis. So, nothing can deter us from supporting Atiku to save Nigeria.

“Wike is not hiding that he is fighting Atiku. He is ready to fight to the finish. We don’t know what he (Wike) is planning to do because when campaigns start, we are qualified to campaign too. We are waiting to see how he will do it. This is a joke taken too far.”

Maeba also confirmed the removal of former Governor Omehia and ex-deputy Speaker of the House of Representatives, Opara, as leaders of their party in Ikwerre and Port Harcourt City LGAs respectively.

Meaba added, “Yes, he (Wike) called them before their people because we went to pay a solidarity visit to Atiku which we are supposed to do. All of us knew Atiku before him. Austin Opara has been in the House of Representatives since 1999. He was the deputy speaker when Atiku was vice-president. That time, Wike was struggling to be a local government chairman. So, if Austin Opara has to take permission from him today to go and see Atiku, then something is wrong.”

“Let me tell you something. When you apportion so much right to yourself, then you are superhuman. Austin Opara was the deputy speaker of the House of Representatives when Atiku Abubakar was the Vice President. They attended caucus meeting together and National Economic Council Meeting. So, does it mean that Austin Opara, who has been friends with Atiku for over 20 years ago, will now start to beg Wike to go and see Atiku? I met Atiku first in 1992 in Jos for the Social Democratic Party (SDP) campaigns. We started working together in 2003 when I became senator. That time where was he (Wike)?

“When Austin Opara was working with Atiku, holding meetings, Wike was struggling to come into limelight.”