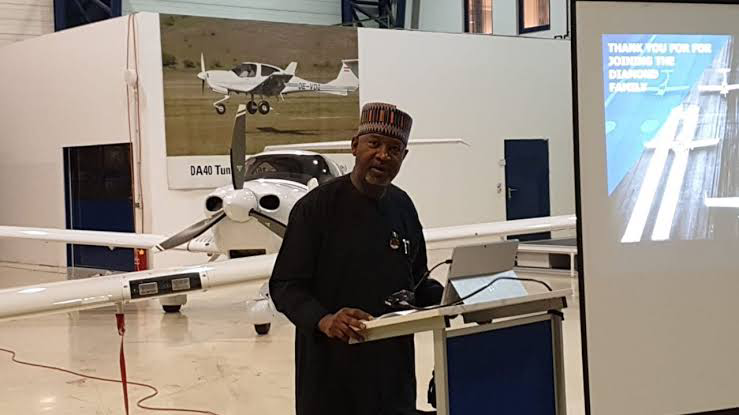 The Federal Government has disclosed its intention to establish aviation university.

The government said the university would address the research and development deficit, which is apparent in the aviation sector.

Named African Aviation and Aerospace University, the institution which will be situated in Abuja is expected to commence academic activities this year with courses in BSc Aviation Business and BSc Meteorology.

These were disclosed in Abuja on Friday by the Minister of Aviation, Sen. Hadi Sirika during a briefing.

The Minister also said for efficiency, the university will eventually be privatised.

He said the need to establish the university was due to the desire of the government to contribute more to the aviation sector which will in turn boost the country’s economy.

The minister explained that Buhari’s administration wants the country to go beyond churning out pilots, engineers, cabin crews and others.

Sirika also hinted that the federal government is in partnership with NILE university to use its space pending the completion of the University structure.

According to the Minister, land has been allocated to the university within the Abuja airport area for it to build.

On why the establishment of an institution is important, he said: “All the things that we are seeing that is going wrong with our aviation is largely due to lack of capacity and understanding of the business itself.

“Aviation is a very thought out and dynamic industry with changes frequently. So, we need to keep up with the speed and have people who have the capacity and requisite knowledge to run the business.

“It is not enough to be a pilot or an engineer like me to run an aviation business, it is an art by itself and a profession, so Buhari’s government seeks to change that and because of how fast aviation and aerospace are changing the world over, we need to participate in it to be able to go into huge research and development in civil aviation. We should not be left behind.

“Aviation has been in Nigeria for a very long time and by now, we ought to be on top of the world with innovation in aviation and aerospace.

“We have had people who were born in the early 1930s and became pilots in Nigeria like Captain Rob, so from their time till now, nothing has really changed beyond the production of pilots, engineers, cabin crew, radio engineers, traffic controller, and others.

So, we need to move from these basic skills into real knowledge so that we can contribute immensely to the GDP of the country and the general and socio-well being of Nigeria. We do feel that it is a very good venture.

“As a minister, this is the most important legacy that the government will leave behind.”

On the details of the university, the minister said: “We think that it is high time that the country goes into huge research and development in the areas of aerospace and aviation.

“We need to establish a university dedicated to that and it has taken a very long time. Since 2016, we have been on it because it is a rigorous exercise, we need to go through all of the requirements by the National Universities Commission(NUC), they have been very cooperative and supportive and guided us through the process.

“So, here we are today with the university about to start. The name of the University will be the African Aviation and Aerospace university.

“So, the component of Africa is to make it Pan-African and it is not limited in terms of experience to Africa, Nigeria will be the focus and centre and Africa will be the catchment area.

“The university has been given a location very close to the airport area by the government and it will be established there. This university is supposed to be a hybrid university, work on campus as well as an online university”.

On when academic activities would commence and some of the courses the school will major in, Sirika said: “We have the provisional approval by the NUC to continue and once we satisfy the requirements, we will start.

“For the start-up, because we will be needing dormitories, laboratories and so on, we will be partnering with Nile University of Nigeria in Abuja.

“We have an MoU which will be signed hopefully by Monday for official partnership but we have discussed and agreed and it is just the formality for the signing.

“The lectures will be done at the temporary headquarters at Accident Investigation Bureau (AIB-N) building at the airport and some of the lectures will also be done in Nile University of Nigeria”.

“So, the first year which is this year, we will be doing BSc Aviation Business and the second will be Bsc Meteorology and these are the two that will start.

“The second year which is 2023, we will be doing Masters in Air Transport Management, this is all part of what we discussed with the NUC and we have gotten approval for that.

“Our website will be open for registration from the 26th of September to the 18th of November.”

On how the school will be managed, he said: “This university, we will eventually have it privatised for more efficiency and more focus.