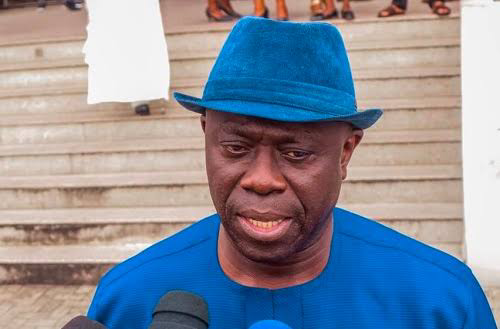 He said the programme was suspended over increasing tuition fees, which he claimed, have reached over N7 billion per session.

Ndiomu stated that the over 350 indigenes of the Niger Delta with First Class and Second Class Honours (Upper Division) who have been offered directive employment in the federal civil service had yet to be absorbed despite presidential directives.

According to him, the government would discuss with the private universities for a percentage payment before exploring the possibility of re-awarding scholarships “in a more rational and reasonable manner consistent with the budget of the amnesty programme.”

He said the report of the education audit which had just been submitted indicated that three-quarters of the beneficiaries were not the ex-agitators for which the programme was intended to carter as large number of ex-agitators have not been trained.

Ndiomu who stated these in an interview with select journalists in Abuja said he had, as one of his mandates, to stop contracts and scholarships in the amnesty programme in line with his reform agenda.

He said, “Let me quickly mention here that one of the reasons it was necessary to suspend the scholarship programme was because of the costs of the Presidential Amnesty Programme.
For example, we now have a total of well over 3,000 individuals to whom scholarships have been awarded.

If you looked at the bill, tuition fees are well over N7 billion for a session. We are talking about onshore 3,000 plus, offshore, and there’s no government institution. There was a need to take a second look at it and that was why we had that problem with Baze University because it was just impossible to pay the tuition across these institutions.

“These were not government-owned Universities; we are talking about private Universities. Millions of Naira are being spent on individual students, I don’t want to put blame on anyone but that was, without any doubt, reckless. There was need to take a second look at it which we are doing. We are not going to suspend the scholarships which have already been awarded because it was not the fault of these children to be awarded these scholarships.

“We have to work out a way of looking for the funds to upset these huge bills that we are confronted with. That was why it was possible to discuss with Baze University to do a certain percentage payment, so that later on this year, we will be able to upset the balance of the tuition fees.

“We hope to do that with all other institutions before we can begin to talk about re-awarding scholarships in a more rational and reasonable manner consistent with the budget of the amnesty programme.”

Ndiomu also shed light on the over 350 Niger Deltans who have not been employed in the federal civil service despite a presidential directive in 2017.

He, however, expressed optimism that something positive would be done, having visited the Head of Civil Service of the Federation, Folashade Yemi-Esan, adding that he would also visit Vice President Yemi Osinbajo on same issue