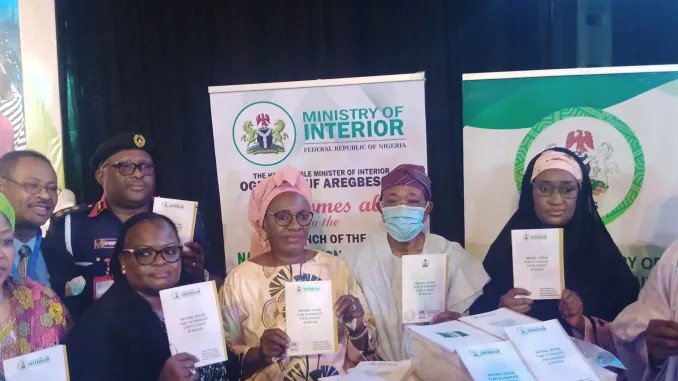 The Ministry of Humanitarian Affairs, Disaster Management and Social Development, Ministry of Interior, the United Nations High Commissioner for Refugees (UNHCR) and other stakeholders have launched a National Action Plan (NAP) to end statelessness in Nigeria.

Speaking Friday in Abuja, during the launch of the NAP and inauguration of the High-Level steering committee responsible for overseeing the implementation of the NAP, the Minister of Humanitarian Affairs, Disaster Management and Social Development, Sadiya Umar Farouq, said that a stateless person is someone not considered as a national by any state under the operation of its laws, hence the need to identify and protect many people under the category in Nigeria

She said: “A person can become stateless as a result of a myriad of reasons including lack of birth registrations, discrimination against minority groups on the basis of ethnicity, gender or religion, gaps in nationality laws and transfers of territory between existing states, which can exclude people and make them at risk of statelessness. Persons who are at risk of statelessness include refugees, migrants, children whose births were not registered, nomadic pastoralists and populations affected by border changes.

“Several human rights instruments including the Universal Declaration of Human Rights, International Covenant on Civil and Political Rights, Convention on the Protection of the Rights of all migrant Workers and the 161 UN Convention on the Reduction of Statelessness recognize the right of every individual to acquire a nationality as a fundamental human right.

“Nationality confers legal identity and protection to citizens and is a prerequisite to the enjoyment of other human rights such as the rights to education, healthcare, freedom of movement, employment, housing, vote and public services. Having no nationality and legal identity, stateless persons are often discriminated against and denied access to these basic rights thereby exposing them to exploitation and abuse.

“Realizing the devastating impact of statelessness and the importance of addressing it to ensure protection and fulfillment of human rights of stateless persons, the UN General Assembly by a resolution, mandated the United Nations High Commissioner for Refugees (UNHCR) to lead global efforts to end Statelessness by supporting States in the identification, prevention, reduction and protection of stateless persons with the overall view of preventing and ending statelessness.  On this premise the UNHCR launched the ‘I Belong’ campaign’ and in consultation with States, developed the UNHCR Global Action Plan (Global Action Plan) to end Statelessness, which serves as a global road map for States to help end statelessness.

“The Global Action Plan comprises ten actions recognized within the humanitarian community as the best framework to end statelessness within ten years, if effectively implemented by States.

Also speaking, the Minister of Interior, Ogbeni Rauf Aregbesola, said that there are more than 10 million stateless persons across the globe and that Nigeria hopes to end the menace by 2024 as “statelessness is a human right, developmental, peace and security issue which affects the dignity of vulnerable persons at risk level, strips affected persons of their human right and portrays them as worthless.”