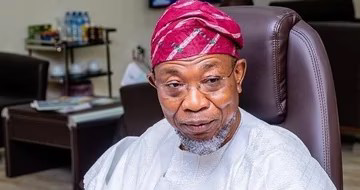 Aregbesola said that the state-of-the-art and technological-driven security features make the e-passport virtually impossible to counterfeit or manipulate.

He noted that the enhanced e-passport, including its elaborate security features, is a major design of the Federal Government to check international passport racketeering and other forms of manipulations.

According to him, we urge Nigerians to fill their forms online, pay for it online and get their biometric capturing dates as well online; by using their simple android phones within the comfort of their homes or offices.

“Those days of asking people to help you do it or an immigration officer to assist passport applicants are over and this will help check racketeering, fraud and other manipulation in the system.

“With the enhanced e-passport, the Federal Government through the Ministry of Interior will eliminate corruption and racketeering in the system,” he said.

The minister said for now, the electronic passport (e-passport) and the enhanced e-passport would be in existence side-by-side.

He said that there were over 50,000 processed and uncollected international passports throughout the country, adding that the ministry would help to meet the backlog of 14,021 passports in demand as at today.

“Between 2019 and now, Nigeria Immigration Service (NIS) has issued three million passports and just last year alone, we issued 1.3 million passports. So, there is more need for our passport.

“The people of South-East travel a lot and the enhanced e-passport, with some of its categories is longer validity and pagination. It would surely help the people of the zone meet their international travel needs,” he said.

Aregbesola noted that the passport production facility would facilitate the ease and speed of getting passports in the zone, adding that it would not be more than six weeks for fresh applicants and three weeks for those applicants for renewal.

The minister, however, urged Mr Joachim Olumba, Controller of NIS, Enugu State Command, to liaison with the state government to plant massive trees within the NIS complex in Enugu to safeguard the environment against harsh weather.

Earlier, Mr Isah Idris, the acting Comptroller General of NIS, said that the introduction of enhanced e-passport is meant to transform the entire passport issuance and processing system as well as improve service delivery.

“Applicant’s National Identity Number (NIN) is a compulsory requirement for obtaining the enhanced e-passport,” he added.

In an address, Gov. Ifeanyi Ugwuanyi of Enugu State, appreciated President Muhammadu Buhari, the minister and NIS authorities for inaugurating the enhanced e-passport and passport production facility in Enugu.

Ugwuanyi, who was represented by the Secretary to the State Government, Prof. Simon Ortuanya, said: “We sincerely believe that the enhanced e-passport will definitely eliminate corruption, bribery, manipulation and racketeering in the entire passport system.

“As a government, we are happy that the Federal Government, through the ministry and NIS, has kept faith and assurance of providing Nigerians and indeed the entire citizenry an enhanced e-passport we can be proud of.

“The state will continue to partner the NIS and the Federal Ministry of Interior to ensure that immigration services get to all,” he said.

The governor also assured the minister that it would cooperate with the command to ensure that trees are planted all over the NIS Command complex in Enugu.