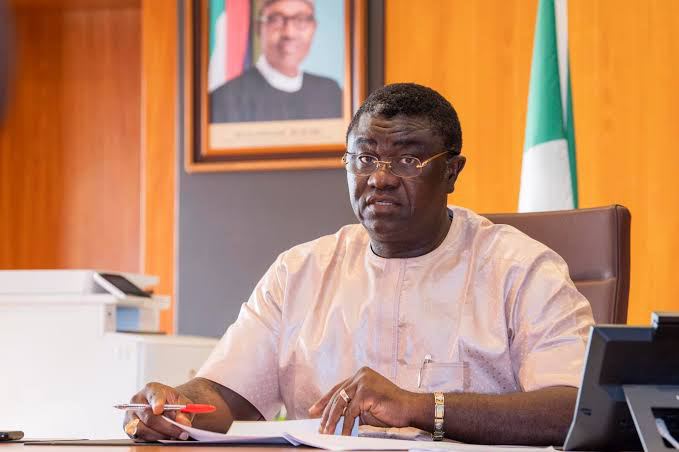 The Federal Government says the hunger and poverty in Nigeria can largely be blamed on State Governors who prefer to build unnecessary airports and flyovers instead of roads to enable farmers transport their produce easily and cheaper.

Minister of State for Finance, Budget and National Planning, Clem Agba, made the submission on Wednesday in response to State House correspondents’ question what the Federal Government was doing to address the current hardship and suffering besetting Nigerians.

The Minister said that State Governors should be held accountable, especially as they control lands that can be used to cultivate more food for the populace, instead of embarking on projects that do not have immediate impact on their wellbeing.

His words: “At the federal level, government is putting out so much money but not seeing so much reflection, in terms of money that has been put in alleviating poverty, which is one of the reasons the government also put in place the national poverty reduction with growth strategy.

“But if the Federal Government puts the entire income that it earns into all of this without some form of complementarity from the State governments in playing their part. It will seem as if we are throwing money in the pond because the Governors basically our only functioning in their State capitals.

“Right now 70% of our people live in rural areas they produce 90% of what we eat. And unfortunately 60% of what they produce is lost due to post harvest loss and it does not get to the market.

“When we’re talking about food prices, like I mentioned right now as driving inflation, prices of food at the farm gates are low. But when you now take it to the urban areas, you find out that the prices are high due to supply chain disruptions, lack of infrastructure to take them there.

“I think from the Federal Government side we are doing our best. But we need to push that, rather than Governors continuing to compete to take loans to build airports that are not necessary where they have other airports so close to them; or Governors now competing to build flyovers all over the place and we applaud.

“They should concentrate on building rural roads so that the farmers can at least get their products to the market.

“And you find that if they do that and with the new policy in the national development plan that talks about taking power to the rural areas, especially of out-of-grid power that can easily be put, you begin to attract industries to those areas for value addition.

“UNIDO report shows us in terms of employment, the MSMEs employs 70% of our people. So you can imagine how much progress we will make when you find that there are roads, there is power in these rural areas.

“In terms of agriculture, you find out that the Federal Government doesn’t have a land that they would plant, government has pushed for the Anchor Borrowers programme and that is going on very well but the States control lands.

“They are the ones to provide land for agriculture. They are not investing in that. They would rather build skyscrapers in a city where people will see and clap but the skyscrapers do not put food on the table.

“Like i always say,  if you look at the Abraham Maslow’s hierarchy of needs. He says you have to take care of the basic needs of individuals first before you begin to talk about self actualization.

“So, we need to take care of the issues of food, nutrition, housing and clothing for our people before we begin to think of how to go to the moon and begin to build flyovers and airports in the State capital.

“That is the missing link which we need to push so that we’ll be able to catalyze growth.

“And I’m sure Wike(Rivers State Governor) told you guys about monies that have been released over N500 billion to the oil producing states and I’ve seen some disclaimers from the States saying, it is small small money they are getting on a monthly basis.

“And some are giving some half truths of what they have received. We need to hold them accountable so that together we all can grow our economy.”