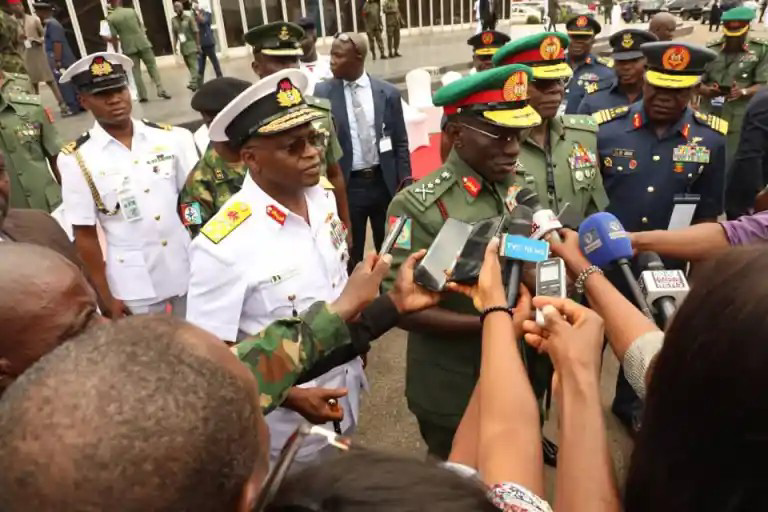 The federal government yesterday launched the new Armed Forces of Nigeria National Military Strategy 2022 that was expected to provide a platform for joint doctrines of the three arms of the military, notably, the Army, Navy and Air Force and other security agencies.

During the launch of the new strategy in Asaba, Delta State, the Minister of Defence, Major General Bashir Magashi (rtd), also assured of government’s commitment towards the improvement of the general security in the country.

The minister, who spoke at the opening ceremony of a four-day Defence Retreat organised by the Defence Headquarters (DHQ) in Asaba, Delta State capital, said the strategy document was part of deliberate efforts by the Armed Forces of Nigeria (AFN) to improve security in the nation.

He stated that the retreat with the theme: “Shaping the Armed Forces of Nigeria for Current and Future Security Challenges,” was anchored on the strong desire of the Chief of Defence Staff and the service chiefs to reposition the armed forces for optimal performance.

This, according to him, was in line with government’s aspiration to continue to make needed investments to ensure that the service became a highly modernised force.

He added that the ongoing efforts by government to improve the operational capacity included the acquisition of armoured vehicles, military aircraft and naval vessels as well as enhanced capacity building and defence cooperation with foreign partners in various countries.

Magashi further identified the significant role of technology in combating multifaceted asymmetric threats, noting that recent deployment of the Nigerian Navy’s Falcon Eye as well as strategic unmanned aerial systems by the Nigerian Army and Airforce were recording huge inroads in the areas of cyber security and forensic security.

The minister urged participants at the retreat to carefully examine various statutory documents and policies guiding the establishment and deployment of the Armed Forces in order to align them with the prevailing and future security realities.

Giving further details of the document, Chief of Defence Staff, Gen Lucky Irabor, affirmed that the national military strategy document would serve as a platform for the Army, Navy and Airforce in terms of administration, training, operations and logistics among other aspects of military activities for optimal performance.

Irabor remarked that the Armed Forces of Nigeria National Military Strategy 2022 document was, “developed to provide a platform for joint doctrines for the three arms of the military to operate seamlessly and effectively.”

He said the AFN had continued to evolve towards strengthening its potential in order to suppress the prevailing security challenges.

The Defence Chief further disclosed that the document would serve as a platform for the Army, Navy and Airforce in terms of administration, training, operations and logistics among other aspects of military activities for optimal performance.

He said the AFN had continued to evolve towards strengthening its potentials in order to suppress the prevailing security challenges.

He maintained that there was improved security situation across the country, noting that the situation would continue to get better.

He expressed delight that the three services were recording operational feats by keying into his leadership philosophy of fostering a professional armed forces capable of effectively meeting its constitutional imperatives.

In his remarks, the Executive Governor of Delta State, Dr. Ifeanyi Okowa, said the retreat provided him the opportunity to acknowledge and appreciate the unwavering support of the AFN towards the maintenance of peace and security in the state.

He said his administration had enjoyed peace which brought about the implementation of policies and programmes in the areas of entrepreneurship, infrastructural and educational development.

The Delta State governor also urged the AFN to use the opportunity offered by the defence retreat towards reviewing its operations by perceiving new trends, evaluating information and strategy to combat emerging security challenges.