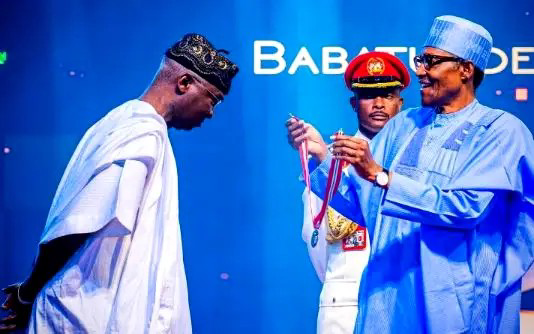 President Muhammadu Buhari has conferred national awards on 447 Nigerians including the Director-General of the World Trade Organization (WTO), Dr Ngozi Okonjo-Iweala, Speaker of the House of Representatives, Femi Gbajabiamila and the Minister of Works and Housing, Babatunde Fashola.

The National Honours Award Investiture ceremony at the International Conference Centre, (ICC) in Abuja on Tuesday was in recognition of Nigerian citizens and foreign nationals who have distinguished themselves in their respective professions contributing to the national development.

Those who are awarded the honour of Grand Commander of the Order of the Niger (GCON) are Okonjo-Iweala, Hon Justice Olukayode Ariwoola and Hon Justice Ibrahim Tanko Muhammad – the current and erstwhile Chief Justice of Nigeria (CJN) respectively; the Deputy Secretary-General of the United Nations, Ms Amina J. Mohammed;  and renowned diplomat, Professor Tijjani Muhammad-Bande.

Prominent among awardees of Commander Of the Order of Niger (CON) is Delta state governor and vice-presidential candidate of the Peoples Democratic Party (PDP), Ifeanyi Okowa, and some state governors like Nasir el-Rufai of Kaduna, Professor Babagana Zulum of Borno, are also recipients.