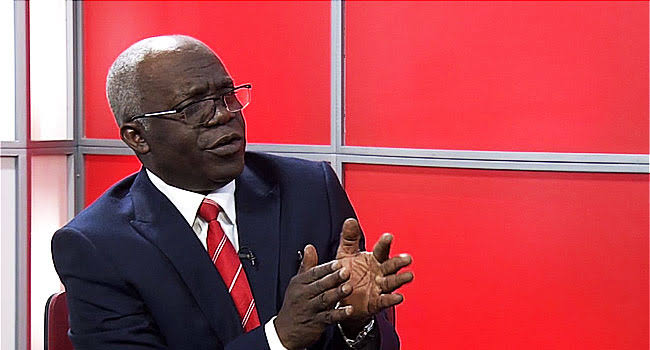 Addressing a Southwest youths and women conference at Ado-Ekiti on Thursday, Mr Falana said Emefiele’s continued stay in office as CBN governor could erode and compromise the credibility of the 2023 general elections.

Mr Emefiele had indicated interest to contest as president in 2023 on the platform of the ruling All Progressives Congress, but rescinded the decision on Wednesday.

Mr Falana, guest speaker at the conference, said that for free, fair and credible 2023 general elections, INEC should not keep sensitive election materials at the CBN with Dr Emefiele sitting in office as its governor.

“INEC is trying; it has deployed technology to get rid of rigging, but we can no longer keep sensitive election materials in the vault of the CBN.

“This is because the governor of the CBN is a card-carrying member of the All Progressives Congress.

“It has never happened anywhere in the world; this is very dangerous. The CBN governor’s power is enormous under the CBN Act, so he can’t be a politician.

“We can’t look for an alternative place to keep our electoral materials; it is the CBN governor that must be removed and whether President Buhari likes it or not, Emefiele must go.

“Some Civil Society Organisations have filed a motion against him and we will pursue it to a logical conclusion,’’ Mr Falana stressed.

He also suggested the establishment of electoral offences tribunals across the country to prosecute offenders and sanitise the system and also to stem election manipulation and bloodshed.

The rights activist expressed regret that while the police had arrested more than 2,000 electoral offenders from the 2011 general elections onward, most of them were neither prosecuted nor punished.

He argued that: “people commit electoral crimes because they are aided by politicians.

“Majority of them were not prosecuted; the police even filed motions to terminate some of the cases and discontinued prosecution.’’

Mr Falana also expressed worries over the use of youths as thugs.

“Don’t allow politicians to induce you with money,’’ he admonished youths.

“When I was contesting in 2003, I told politicians that if you wanted the children of the poor to be thugs, let your children lead them.

“What I have seen in Nigeria is that politicians give thugs money, drugs and arm them and after the election, they will not be able to fund the thugs and they become criminals.

“All we demand at this time is credible, free and fair election,’’ Mr Falana said.

He added that the electoral system would remain stunted as long as youths and women were perpetually neglected.

The conference where Mr Falana spoke was put together by two NGOs, the New Generation Girls and Women Development Initiative, NIGAWD, and Balm in Gilead Foundation for Sustainable Development, BIGIF.

The BIGIF and NIGAWD Executive Directors, Oluwatumininu Adedeji and Abimbola Aladejare-Salako, respectively, urged INEC and other stakeholders to work hard to prevent rigging, bloodshed and violence at the oncoming Ekiti and Osun governorship elections.

Governorship elections are to be held in Ekiti on June 18 and in Osun on July 16.

Adedeji and Aladejare-Salako also asked that youths and women be included in policy making organs of all political parties to give them recognition.

It has the slogan: “Vote not Fight.’’