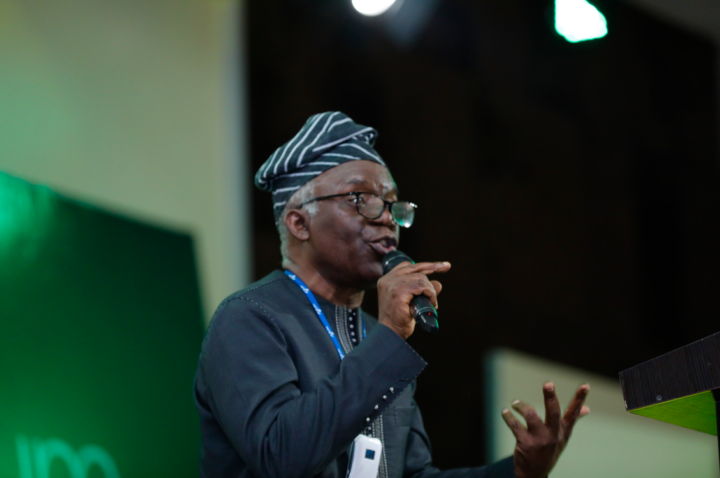 Femi Falana, a senior advocate of Nigeria (SAN), says votes cast in any election in the country belong to the political parties, not candidates.

On March 8, Inyang Ekwo, the presiding judge at a federal high court in Abuja, sacked David Umahi, governor of Ebonyi, and Eric Igwe, his deputy, over their defection from the Peoples Democratic Party (PDP) to the All Progressives Congress (APC).

The judge held that the votes polled by Umahi in the March 2019 governorship election belonged to the PDP and cannot be transferred to the APC.

Consequently, Ekwo ordered the PDP to present another candidate or, in the alternative, the Independent National Electoral Commission (INEC) should conduct a fresh poll within 90 days.Advertisement

The issue has generated concerns on a possible constitutional crisis in Ebonyi since a court has also sacked the speaker of the state house of assembly and 15 other lawmakers for defecting from the PDP.

Speaking on the development in a legal opinion article released on Tuesday, Falana said critics of Ekwo’s verdict failed to state that the majority of votes in the Ebonyi 2019 governorship poll were in favour of PDP that presented Umahi as flagbearer.

“Those who have placed uncritical reliance on Atiku’s case have failed to appreciate that the validity of the votes scored by the PDP in the presidential election did not arise for determination,” the article reads.Advertisement

“To that extent, the case cannot be a justification for the subversion of the democratic rights of voters by political defectors.

“Whereas in the 2019 governorship election in Ebonyi State, the PDP garnered 393,343 votes across the 13 local governments areas of the state, its closest challenger, the APC, got 81,703 votes.

“After the PDP had emerged the winner of the election, the certificate of return was issued in the name of its flagbearer by the INEC Chairman, Professor Yakubu Mahmood, who stated that ‘I hereby certify that Nweze David Umahi of Peoples Democratic Party (PDP) has been elected to the office of Governor of Ebonyi State…’

“Even though Governor Umahi has decamped from the PDP to APC, neither the INEC nor the high court of Ebonyi state has amended the certificate of return to read ‘Nweze David Umahi of the All Progressives Congress.’

“It is interesting to note that some lawyers have maintained that Governor Umahi has exercised his freedom of association by decamping from PDP to APC.

“While the governor’s freedom of association is constitutionally protected, he cannot be permitted to infringe on the democratic rights of the 393,343 citizens who voted for him as the governorship candidate of the PDP.

“Or are we to believe that the votes scored by the PDP have been merged with those of the APC since the PDP candidate decamped to APC?

“Curiously, in making a mockery of the democratic rights of the people of Ebonyi State, the critics of the judgment of Justice Egwu have failed to advert their minds to the undeniable fact that the majority of the voters actually exercised their franchise in favour of the PDP. After all, the names of the candidate David Umahi and his deputy were not on the ballot papers.”Advertisement

Falana also cited a reference to the case of Zamfara in which the votes of the All Progressives Congress (APC) were nullified in 2019 by the supreme court over issues arising from the party’s failure to conduct a valid primary.

“In the leading judgment of the Supreme Court in All Progressives Congress v. Marafa, LOR (24/05/2019) SC, Justice Paul Adamu Galinji declared that all the votes cast for the APC were ‘wasted votes’ on the grounds that the party failed to conduct a proper primary,” Falana said.

“The court added that all political parties with the second highest votes in the elections and the required spread, are elected to the various elections.

“In the instant case, the votes credited to the PDP in the 2019 governorship election in Ebonyi State cannot be said to have been wasted based on the decision of Governor Umahi to decamp to the ruling party.

“Since the said votes are not wasted, it is inconceivable that they have been legally transferred from the PDP to the APC. Under no law in Nigeria can the exercise of the right of Governor Umahi to defect from the PDP to APC extinguish the 4-year mandate freely given to him on the platform of the PDP during the 2019 general election.

“We wish to submit, without any fear of contradiction, that elections are won by political parties and not by candidates.

“In Amaechi v. INEC & Ors (2008) LCN/3642 (SC), the Supreme Court held that ‘The above provision (i.e. section 221) effectually removes the possibility of independent candidacy in our elections; and places emphasis and responsibility in elections on political parties. Without a political party a candidate cannot contest’.”