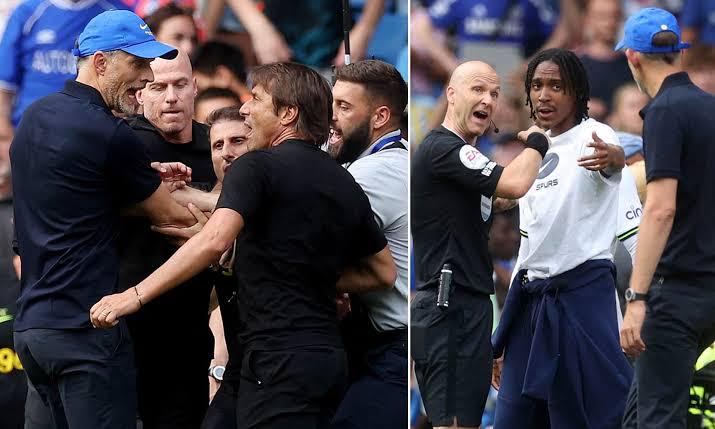 The Football Association is investigating Thomas Tuchel’s remarks regarding Anthony Taylor after Chelsea’s head coach suggested that the referee should no longer officiate his side’s games.

Tuchel, who is already likely to be hit with a one-game ban following his extraordinary touchline clash over a handshake with Antonio Conte following Chelsea’s 2-2 draw with Tottenham on Sunday, is facing the prospect of further disciplinary action after appearing to question Taylor’s impartiality

The German was furious after both Spurs goals were allowed to stand in controversial circumstances, denying his side a vital win, and he did not hold back with his criticism of the refereeing. Tuchel said that the “whole dressing room” has an issue with Taylor, who has a history of infuriating Chelsea with his decisions, and he went on to question whether the 43-year-old should be barred from taking charge of the Stamford Bridge club’s games any more

The comments from Tuchel, who is also waiting to find out if he and Conte will be charged by the FA after the rival managers were both shown red cards, come less than a year after more than 80,000 Chelsea fans signed a petition calling for Taylor to be removed from their club’s fixtures. The statistics show that Taylor has shown more yellow cards to Chelsea players than those from any other team during his career. He has also shown controversial red cards to Reece James and Mateo Kovačić, while he was criticised for failing to punish Manchester United’s Harry Maguire for an apparent stamp on Michy Batshuayi in February 2020.

That history bled into Chelsea’s draw with Spurs. Tuchel’s first eruption came when Taylor decided not to penalise a Rodrigo Bentancur challenge on Kai Havertz during the build-up to Pierre-Emile Hojbjerg making it 1-1 midway through the second half. He also argued that the goal should have been ruled out for offside against Richarlison.

However Mike Dean, the Video Assistant Referee, decided that the Spurs striker was not interfering with play and that his positioning had not affected Edouard Mendy’s ability to save Hojbjerg’s shot. The officials took guidance from Mendy hitting out at Chelsea’s defenders instead of appealing for offside.

But Tuchel was infuriated. He complained about the failure to give Havertz a free-kick and then clashed with Conte on the touchline. The two managers had to be pulled apart and both received bookings.

Tuchel was later spoken to by the fourth official after charging down the touchline to celebrate Reece James putting Chelsea 2-1 up. The atmosphere on the touchline was intense and Chelsea were aggrieved when a VAR before the corner that led to Harry Kane equalising in the 96th minute did not result in Dean instructing Taylor to dismiss the Spurs centre-back Cristian Romero for pulling Marc Cucurella’s hair.

Taylor had not seen the incident in real time and Dean’s view was that Romero had not committed a red-card offence. The Argentinian will not face retrospective action from the FA.

However, Tuchel does have a case to answer after his comments about Taylor. It was put to him that Chelsea fans have historical grievances with Taylor. “I don’t think that just some of the fans think that,” he said. “I can assure you that the whole dressing room, every single person thinks that. I cannot understand how the first goal is not offside. And I cannot understand since when players can pull other people’s hair and stay on the pitch and attack in the last corner.”

Tuchel, who said his players worry about Taylor, was asked whether Taylor should be kept away from Chelsea. “Maybe that would be better,” he responded. “Maybe it would be better but we also have VAR to help make the right decisions.”

Tuchel made light of his clash with Conte, but he is expected to miss Chelsea’s trip to Leeds this weekend following his red card. “I cannot coach but the referee can whistle the next game,” he said. “Good.”

Conte, who also played down his row with Tuchel, is also facing the prospect of being banned for Spurs’s home game against Wolves. The Italian later took to social media to aim another swipe at Tuchel for charging past the Spurs bench and down the touchline to celebrate Reece James putting Chelsea 2-1 up.

“Lucky I didn’t see you … making you trip over would have been well deserved … ” Conte wrote on Instagram.