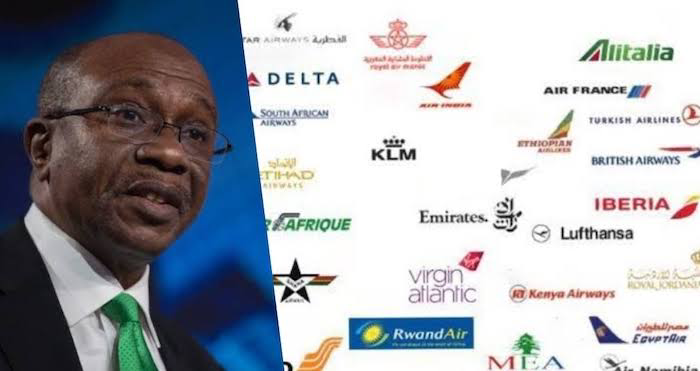 Following the announcement of the release of $265million trapped funds to foreign airlines by the Central Bank of Nigeria (CBN), the international carriers have reintroduced their lower class tickets, better known as lower inventory in their operations in Nigeria.This came as aviation industry stakeholders have commended the CBN for releasing $265 million in trapped funds to foreign airlines, saying the action saved the image of the country.

Some foreign airlines had raised the alarm over their inability to remit their revenues in Nigeria, amounting to about $450 million.Last week, Emirates Airlines announced that it would suspend all flights to Nigeria from September 1, 2022, over its stuck $95 million.However, the Nigerian government bowed to the foreign airlines’ pressure on Friday with the release of $265 million of the trapped funds. This development encouraged the airlines to reintroduce their lower-class tickets.

The reintroduction of the airlines’ lower inventory in their booking means that Nigerians can now buy cheap tickets for their travels.These cheap tickets were blocked by the airlines following their inability to repatriate their revenues to their countries in foreign currency.For instance, the foreign airlines had for the past three weeks introduced tickets that ranged from N1.2million to N1.5million for economy class, which used to be sold for N400,000 in January and February this year.

They also introduced N4million tickets for business classes that used to go for between N1.5million and N2million.However, with the release of part of their trapped funds, the airlines have reintroduced cheaper tickets.Some of the airlines had also reduced their flights to Nigeria to cut back losses.

Meanwhile, aviation industry stakeholders have commended the CBN for releasing $265 million to foreign airlines.They however urged the federal government to have a permanent solution to the trapped fund’s problem.Reacting to the announcement of the release of the fund by CBN, the Group Managing Director, Finchglow Holdings, and the immediate past President of the National Association of Nigeria Travel Agencies (NANTA) Mr. Bankole Bernard commended the CBN for releasing the money to the airlines.Bernard, who spoke to THISDAY, said the apex bank saved the image of Nigeria

“What CBN has done is a welcome development because in everything we look at things from the positive development. But they should have saved the country the embarrassment and high cost of flight tickets levelled on Nigerians, especially those students who were travelling back to school overseas. If CBN had announced to the airlines that they would pay this money, the airlines would not have embarked on a certain action to cut down their losses, which include selling high inventory tickets and reducing their flights,” Bernard said.

Bernard argued that when tickets are bought from outside to travel to Nigeria, the country loses a five per cent charge from that ticket, known as the ticket sales charge, which the Nigerian Civil Aviation Authority (NCAA) collects on behalf of aviation agencies.

Also speaking on the issue, the former Managing Director of the Nigerian Airspace Management Agency (NAMA) and former CEO of Aero Contractors, Captain Ado Sanusi, told THISDAY that CBN has saved the image of Nigeria with the payment made to the foreign airlines.“It is a really welcome development. But my reaction is if they knew they would make that payment they should have communicated to the airlines and assured them they would pay the money. This is because communication is key. They shouldn’t have waited until airlines began to issue threats before making the payment.

“Let me also call on the government to make forex available to domestic airlines too. I think we should have a permanent solution to forex. This should be made available to both local and international airlines,” he said.On his part, an industry analyst and the Publicity Secretary of Aviation Round Table (ART), Olu Ohunayo noted that the payment has helped Nigeria to redeem its image.

He said that the challenge before Nigeria is to win back its credibility as a credit-worthy nation.“I hope we will not get backlash from other sectors of the economy based on our action in the aviation sector. We should not allow the industry to lump us together with Venezuela, Lebanon, and Zimbabwe which have been on this for a while. We do not belong there. Now that the first tranche of payment has been made, they must continue to provide the forex so that by December/January they would have completed the payment,” he said.Also reacting, a travel expert and organiser of Akwaaba African Travel Market, Ambassador Ikechi Uko, told THISDAY that by releasing the funds, the Nigerian government adhered to the Bilateral Air Service Agreement (BASA) it signed with the countries that host these airlines. He suggested that the government should find a way to release the money more regularly, even if in tranches

CBN should go further by extending that gesture to domestic airlines by making forex available to them. The airlines have been losing their fleet from 60 aircraft to 30 aircraft and now it might have gone down to 20. It is also good to note what the Lagos Chamber of Commerce said recently. The body noted that inflation that spiked in June and July this year was caused by a crisis in the aviation sector. The roads are bad; the number of operating aircraft has reduced; this is the time the government should address the issue of forex with domestic airlines,” Uko said.