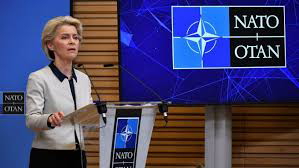 EU capitals are homing in on a far-reaching package of sanctions that Brussels says will sever Russia’s access to capital markets, drive up its inflation rate and hobble its high tech industries.

The Russian foreign ministry pledged to respond “harshly” to sanctions based on a principle of reciprocity, as officials said EU ambassadors meeting in Brussels had on Thursday backed plans from the European Commission for a “massive and targeted” package. EU leaders meeting in Brussels later are expected to sign off on the sanctions later on Thursday after they convene at 8pm.

Diplomats said the measures would have “serious consequences” for Russia’s economy and its ruling regime. Ursula von der Leyen, commission president, said the measures would include “financial sanctions that harshly limit Russia’s access to the capital markets” and “cut off Russia’s industry from the technologies desperately needed today to build a future.”

The EU’s measures, which have been in development for months in conjunction with the US, UK, Canada and other allies, are not expected to directly target Vladimir Putin, the Russian president, or foreign minister Sergei Lavrov, diplomats said.

Some countries have raised the possibility of this being an option further down the road. “You have to keep something up your sleeve,” said one official. Legal issues specific to the EU’s sanctions regime may delay the EU blacklisting of some Russian oligarchs and their families, according to diplomats familiar with the EU discussions.

Cutting Russian banks from the Swift international payments system remains an option, but diplomats doubt that EU leaders will give it the green light as soon as Thursday evening.

EU leaders are due to consider the measures in Brussels later on Thursday along with the bloc’s wider response to the crisis, including the brewing humanitarian and refugee crisis on its borders. Earlier in the day, Romania reported thousands of people lining up at the country’s checkpoints with Ukraine, with Poland and Hungary also reporting an uptick in arrivals.

In a draft statement of the summit’s conclusions, seen by the FT, the leaders will call for the sanctions to be put into law “without delay”. They also demand a new round of sanctions on Belarus, which permitted Russian troops to operate from its territory, amid complaints from Baltic states that the existing regime contains too many loopholes.

The European Council will ask the commission to put forward further contingency measures, according to the conclusions. These refer to the need for Brussels to find ways of providing financial support to member states that are heavily affected by the humanitarian crisis and inflows of refugees, and also to examine ways of mitigating the impact of sanctions and Russian countermeasures on hard-hit member states down the road.

Business Europe, a lobby group for Europe-based companies, said that “European businesses will be bearing the burden [ of the sanctions] including companies trading and operating in Russia” and called for early guidance and detailed information not just about the sanctions, but also supporting measures needed to mitigate the impact.

Moscow threatened the EU with retaliatory measures as EU ambassadors met in Brussels. “The new unfriendly steps taken by the EU against Russia . . . cannot stop the progressive development of our states and the provision of assistance to them. We will respond harshly in accordance with the principle of reciprocity, which is basic in international law,” the Russian foreign ministry said in a statement released on Thursday.