Entrepreneurship is one of the ways we can develop Africa”: Tony Elumelu 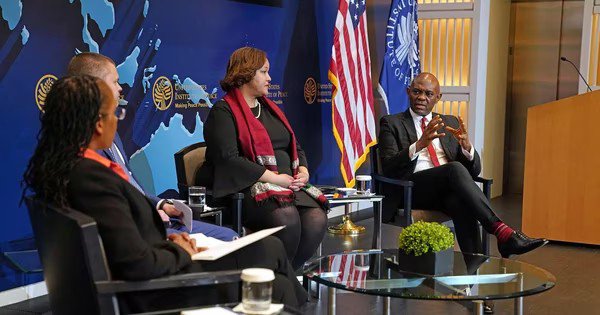 Tony Elumelu, chairman of the United Bank for Africa (UBA) Plc, has called for a “re-imagined” relationship between the United States and Africa.

The Nigerian entrepreneur said the United States needed to shift its focus from providing aid that inevitably encourages dependency to supporting the continent’s institutions that help empower youths through businesses and job creation.

He spoke at a recent event co-hosted by the United States Institute of Peace (USIP) and the Heritage Foundation in Washington.

“Entrepreneurship, peace and conflict are linked one way or the other,” Elumelu said.

“Young people who are engaged in bettering their own lives and their communities will reject the lures of extremism and crime.”

Elumele added that for Africa, a strong private sector, spurred by entrepreneurs, was critical to advancing peace, stability and development.

Asked what the United States can do to improve Africa’s governance, Elumelu replied that “people are beginning to wonder if the U.S. is still there for Africa because of the foray into Africa by other world powers”.

He, however, said America remains admired and respected.

He said a critical step would be to make sure aid makes it past the “last mile” to its intended recipients and purposes; another would be supporting institutional infrastructure that helps address sustainability; and US policymakers and financial institutions should impress on African leaders how their own political goals and private sector success are linked.

Elumelu said there needs to be a reimagining of what Africa needs —”a necessity demonstrated by a dangerous level of youth unemployment that is not improving”.

He said the recent string of coups across Africa should serve as a “wake-up call” for the urgency of addressing the social and economic conditions that lead to political instability.

Elumelu pointed to a partnership with Google as a good example of the relationships that can promote entrepreneurship among young Africans.

He said the tech giant has committed a team to expand the training capacity of the Tony Elumelu Foundation’s digital network, which already includes about a million active and aspiring entrepreneurs.

He added that as the foundation’s programme can only accept up to 2,000 students from 350,000 applicants, Google is helping develop a training platform with unlimited reach keyed to African conditions.

“That digital partnership is such critical support for Africa,” Elumelu said.