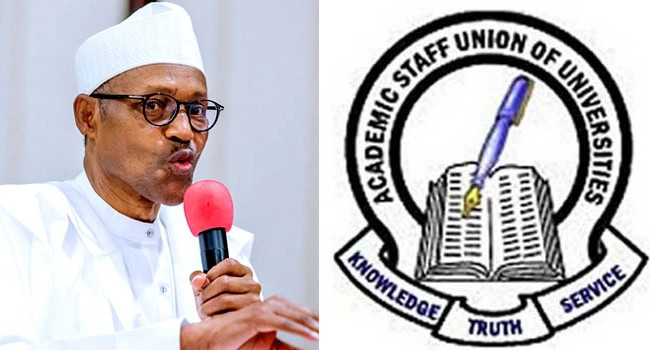 This is as Osodeke yesterday denied describing state-owned universities as quacks.The strike, which began on February 16, is a result of the government’s inability to fully address the union’s demands.The industrial action has lasted for more than six months with the federal government, through the education and labour ministers, finding it difficult to reach a resolution.

Speaking on the way forward, Osodeke, in an interview with AIT’s Focus Nigeria, said the immediate past administration engaged the union in a 14-hour negotiation to resolve the issue.He said the government of the day should set up a committee comprising people who love the country and can negotiate dispassionately.“Government should for once go the way of Goodluck Jonathan. And in one night, we had that meeting for 14 hours,” he said

“If this government can put out a strong team, if the president cannot be there, let him put a strong team together or people who are not part of those who are telling lies presently.“People who love this country. They don’t have to be in government. If you can put this thing together and we meet to look at how we can resolve this national problem.”

ASUU president debunked the report saying he was misquoted by the media.According to Osodeke, he was referring to only three universities owned by state governments which are currently not on strike.Describing the report as fake, Osodeke lamented unprofessionalism in reportage, alleging that the media aimed at creating confusion in the system.He said: “There is nothing like that. It is a lie. I have told myself that I will not talk to the press again because they always misrepresent things.“I have found out that the Nigerian press is specialised in manipulating interviews, reporting what someone did not say just to create confusion in the system. They won’t report things the way it is.”

Meanwhile, ASUU has accused the federal government of displaying an apparent lack of sincerity in resolving the ongoing strike by the union, saying that the government cannot deceive the union to suspend the industrial action. Addressing a press conference in Jos, the Bauchi Zone coordinator of the union, Professor Lawan Abubakar noted that the strike action embarked on by ASUU in February this year is now in its seventh month with more than 95 per cent of the Nigerian universities’ students in 49 Federal and 57 state universities idling away at home.

He lamented that the Minister of Education, Mallam Adamu Adamu and other officials, who had chosen to remain indifferent at the beginning, have now resorted to deceit to sabotage the efforts aimed at resolving the problem by well-meaning bodies like the Nigerian Inter-Religious Council. Abubakar said, “We want the whole world to know that the Federal Government through the Minister of Education, Adamu Adamu did not approach ASUU with any reasonable and acceptable solutions to the issues in the contention that led to the current strike.

“We have not seen anything from the government that would warrant any consultation and subsequent suspension of the current strike action by ASUU members next week as claimed by the Minister of Education.”

He added that “Government is not displaying any commitment to resolving the strike. The December 2020 Memorandum of Agreement (MoA) has not been honoured and by implication, the 2019 MoA, the 2013 MoU and the 2009 agreement have equally not been honoured, let alone implemented

“The strike is not about withheld salary payment as the government has attempted to reduce it. The government has simply made some static offers and is not willing to shift grounds to favourably end the strike. For the government through the Minister of Education to now lead his colleague-ministers to misrepresent facts and mislead the good people of Nigeria against ASUU is rather unfortunate. If this is the way it plans to end the ASUU strike, we take exception to that, and we are assuring the minister that he is wrong because deceit can’t end the strike.”