Emir of Dutse endorses Amaechi’s presidential bid,says he is most qualified for presidency 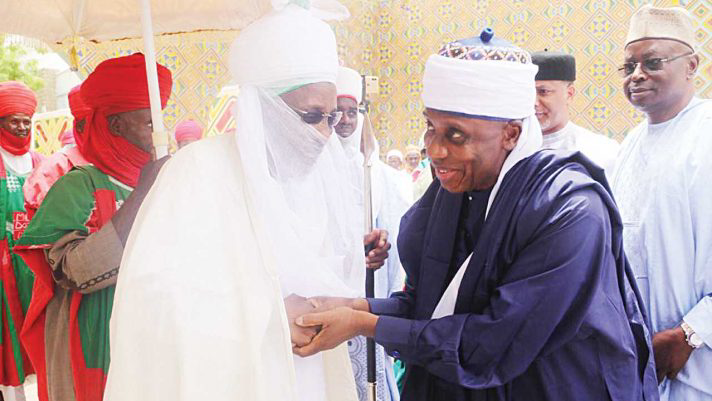 THE Emir of Dutse, Alhaji Nuhu Sanusi, has reportedly endorsed the Minister of Transportation, Rotimi Amaechi, to become the next President of the country.

According to a statement issued by Amaechi’s media office on Tuesday, Sanusi stated this at his palace in Dutse, Jigawa State.

The statement further quoted the Emir as saying that his convictions were based on the aspirant’s performance both as a former governor and minister.

He was quoted as saying that, “He (Amaechi) is an honest man, and whatever you say about him, you cannot change the fact that he is an honest man. He is a confident person. Wherever you see him, you know he is the meaning of total confidence. These are qualities of leadership.

He said: “In Nigeria, we are always carried away by tribal, political and other issues. But there’s a Nigerian that I know, and Amaechi is a true Nigerian who is detribalised.

“He provided a place for Muslims to worship in Rivers State, which I understand is being destroyed after he left. He endured all the humiliations targeted at making the Muslims feel unwanted in Port Harcourt. I also know that God will reward him.

“In this country, we are faced with distress. Part of it is by our own making, not the government. What are these issues? They are: job opportunities, fighting corruption, infrastructural development and social vices, such as armed robbery, banditry and so on.

“These are the problems that are facing our country today. My knowledge and understanding of this gentleman, Chief Rotimi Amaechi, the Minister of Transportation, is that he has what it takes to fight insurgency. He did mention one: when he was governor, there was criminality and other vices and he was able to control it.

“These are things that we need in a leader especially today, people who are confident, who can face realities and challenges. He is resilient. His resilience, I will tell you also, if Amaechi wants to achieve something, by whatever means, he will find a way to get it done, because he is a communicator. This is why I have endorsed him. I have high regard for him and I have confidence in his executive capacity. He is fully competent, being a Speaker twice. He is most qualified.