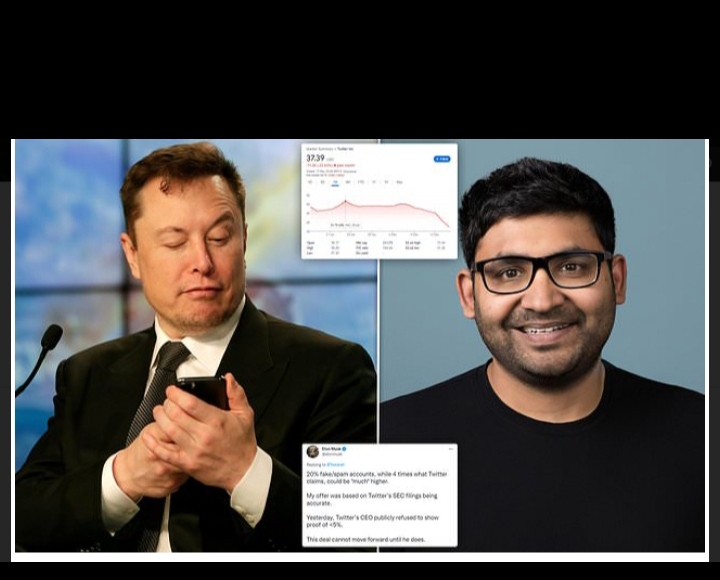 Elon Musk has cast further doubt over his $44bn (£35bn) takeover of Twitter after stating the deal “cannot move forward” until the social media company proves that less than 5% of its users are fake or spam accounts.

The Tesla chief executive used his Twitter account to say the agreed deal would not progress until the firm showed proof that only a small proportion of its users were fake.

“My offer was based on Twitter’s SEC filings being accurate. Yesterday, Twitter’s CEO publicly refused to show proof of <5%. This deal cannot move forward until he does.”

Twitter said within hours of Musk’s latest tweet that it remained committed to the deal, as it filed new details on the transaction with the US financial regulator, the Securities and Exchange Commission. “Twitter is committed to completing the transaction on the agreed price and terms as promptly as practicable,” the company said.

Musk announced last week that the deal was “on hold” after he queried Twitter’s claim in SEC filings that a small proportion of its users were fake or spam.

The Twitter chief executive, Parag Agrawal, attempted to address Musk’s concerns in a lengthy tweet thread on Monday but his efforts to explain the problem “with the benefit or data, facts, and context” were met with a poo emoji from the world’s richest person.

Musk’s latest tweet will add to speculation that he is preparing to walk away from the deal, which could trigger a $1bn break fee payable to Twitter, or attempt to strike a new takeover agreement at a price lower than the agreed $54.20 a share.

Twitter shares, which have been affected by speculation that the deal might founder, were trading at $37.39 on Tuesday.

Fake or spam accounts, known as bot accounts, are automated and not run by human users. They may use the reply function or direct messages to send adverts or scams to users, or represent attempts to influence public discourse by tweeting political propaganda.

Other fake accounts exist purely to boost the metrics of individual users, who can buy followers, likes and retweets from bot sellers who control thousands or millions of fake accounts. Because they also inflate Twitter’s daily user numbers – 229m currently – they also pose a threat to the company’s advertising revenue, which accounts for 90% of its income. However, Twitter has consistently made clear in its quarterly statements since 2014 that it estimates its spam account problem to represent less than 5% of its users.

Agrawal replied to Musk’s concerns publicly on Monday with a lengthy thread in which he explained the company’s methodology. Agrawal explained that tackling automated spam accounts was a “dynamic” process that required fighting “sophisticated and hard to catch” actors. He added that some accounts that had the characteristics of spam accounts were in fact operated by real people.

He added that estimating Twitter’s fake account numbers could not be done externally because the process required access to sensitive data such as IP addresses and phone numbers.

PREVIOUS POST Musk says he could seek lower price for Twitter as he focuses on fake accounts
NEXT POST FG extends money laundering law to casinos, others, bans shell accounts