Elite Russian officers want to poison Putin and replace him 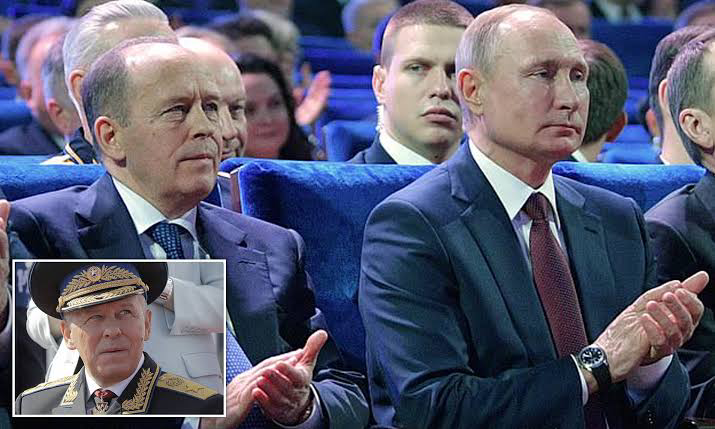 Ukrainian intelligence service has claimed that there is a plot within the Russian top brass to topple Vladimir Putin.

A brief from the Chief Directorate of Intelligence of the Ministry of Defence of Ukraine has said that FSB director Oleksandr Bortnikov is being lined up to replace President Vladimir Putin.

According to the Chief Directorate of Intelligence of the Ministry of Defence of Ukraine, a “group of influential” members of the “Russian elite” have hatched a plan aimed at toppling the president.

The goal of this group is to remove Putin from power as soon as possible and restore economic ties with the West.
According to the intelligence brief, the powerful insiders are dismayed at the impact the war and subsequent sanctions have had on the Russian economy.

The Ukrainian intelligence service claims that a successor to Putin has already been chosen in the form of FSB director Oleksandr Bortnikov.

It is known that Bortnikov and some other influential representatives of the Russian elite are considering various options to remove Putin from power,” the Chief Directorate of Intelligence said.

In particular, poisoning, sudden disease, or any other ‘coincidence’ is not excluded.”
The agency suggested that the losses incurred by Chechen forces in the north of the country may have influenced the alleged plot.

This weekend Ukraine said that part of the notorious Chechen fighting squadron had been sent back to Russia after many of their troops were killed.

The suggestion that Bortnikov is the man to replace Putin could be considered surprising, given how the two men have worked their way up through Russian society together.

They both served on the KGB in Leningrad, before Bortnikov took over the rebranded security agency.Bortnikov’s FSB is both the brain and the heart of the Putin regime, a “state within the state,” according to an in-depth investigation by the Dossier Centre.

At the beginning of the conflict a usually camera-shy Bortnikov delivered the goods for Putin when he claimed that two of his border guards had captured a Ukrainian military saboteur alive on Russian soil.

He said that saboteurs had malicious intentions against the state before they were taken out by his people.

While the claims were pre-empted and then debunked by the West, they served as a means of justifying the war within Russia.
Bortnikov has now fallen out of favour with the Moscow despot, over errors in the Ukraine war.

Putin has lashed out at and sacked eight generals in a bid to divert blame from himself for the bloody war which has killed almost 15,000 of his troops in just 25 days.

The increasingly paranoid leader has even publicly ranted about “traitors” and “scum” who he suspects of being disloyal to Moscow, possibly by leaking information.
The elite plotters, according to Ukrainian intelligence, picked out 70-year-old Bortnikov because they believe he could spearhead the restoration of economic ties with the west.

They are increasingly worried about Russia becoming a pariah state, shunned by the west and having their houses, bank accounts and yachts seized- as well as their ability to travel and conduct business crippled.

Bortnikov is believed to have a network of insiders working and living within Ukraine, where he ran a network of agents for many years.The Urals-born ruthless career spy has long been one of Putin’s closest aides.